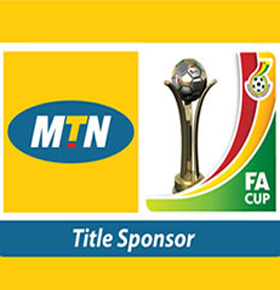 MTN will remain the title sponsors for the FA Cup
Share

The Ghana FA have renewed its sponsorship agreement with MTN for FA Cup worth $3m, according to reports in the local media.

The telecommunication giants will remain the headline sponsors for the knockout competition for a further three years, Kumasi-based Metro FM has reported.

MTN won the rights to sponsor the FA Cup on its revival three years ago and have been satisfied with the competitionâ€™s organisation of the competition and mileage given their brand.

The new deal will see the competition bag a whooping $1m per season.

The FA Cup competition plan to organize a grand launch to reveal further details of the sponsorship renewal later this month.

â€œWe plan to do a launch to give more details over the renewal before this seasonâ€™s competition kicks off later this year.â€

Nania FC, New Edubiase and Medeama have taken turns to win the FA Cup competition since its resurrection three years ago.

The winner of the FA Cup represents Ghana in the CAF Confederations Cup.