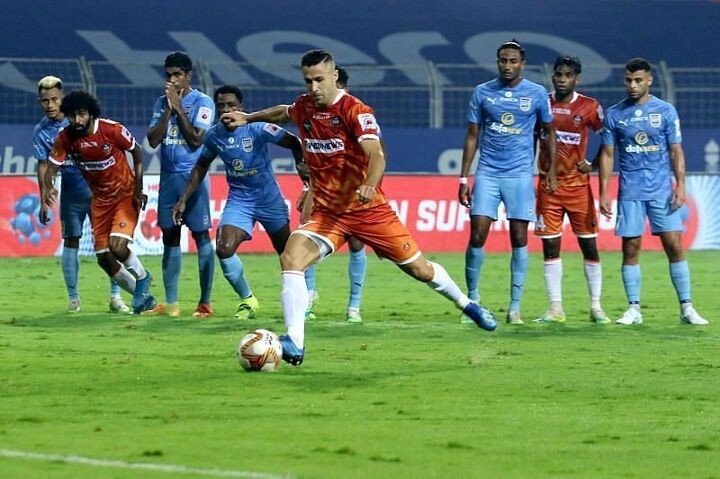 Head coach Sergio Lobera will back the Islanders to get the job done in the second leg of the ISL semifinals. The Mumbai City FC side were made to work hard at the Fatorda Stadium by the Gaurs.

Despite going down in either half of the match, Hugo Boumous and Mourtada Fall's efforts helped Mumbai keep it all level on the scoreboard. With a 2-2 aggregate score heading into the second leg, the Islanders will hope to make the most out of their 'home' ground advantage.

The defense might see some changes as right back Amey Ranawade is back after serving his suspension. Vignesh Dakshinamurthy or Mandar Rao Dessai will have to make way for him. We could also see Hernan Santana in the backline.

Rowllin Borges was not 100 per cent fit for the first leg and could make an appearance in the crucial second leg fixture. The frontline will likely see Bartholomew Ogbeche start up front with Adam Le Fondre coming off the bench.

Spanish head coach Juan Ferrando will have some concerns on his mind as a few players face injury issues. Princeton Rebello is out of the second leg after suffering an injury due to a rough tackle by Mumbai's Mourtada Fall.

FC Goa have some respite in the fact that the Spanish duo of Alberto Noguera and Ivan Gonzalez will be back in the side after their suspensions. Igor Angulo and Jorge Ortiz Mendoza will lead the attacking line for the Gaurs and will be backed to deliver against the sturdy Mumbai defense.

Both sides played with great intensity and desire in the first leg of the match at the Fatorda Stadium. Despite their absences, FC Goa looked confident on the ball and made life difficult for the Mumbai defense.

With a few more injury concerns, it will be interesting to see how FC Goa cope up in the second leg. Mumbai City FC will want to progress into their first-ever ISL final. They will be favorites heading into the second leg of the semifinals.