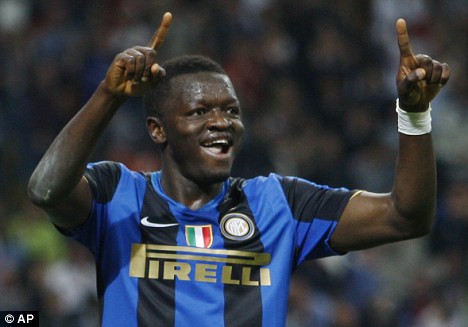 Despite missing out of the last edition of the African Cup of Nations through injury, Sulley Muntari is determined to see Ghana make up for the title miss.

Ghana, missing six key players including the Inter Milan player rode on to the finals in Angola only to lose to Egypt, 1-0 two years ago.

Now back in the squad, Muntari is keen to help the Black Stars to the title to end a 30-year long wait regardless of how difficult the competition would be.

Muntari in an interview with ESPN ahead of the travel to Gabon says the frustrations of the past is driving driven him to win something.

"Is going to mean a lot because itâ€™s been a long time that Ghana has won the trophy," Muntari said.

Along with the pressure of having to achieve something, Muntari is happy with the atmosphere in the Ghana camp.

"Itâ€™s a wonderful atmosphere always in the Ghana camp because you feel at home and we are all brothers, Thatâ€™s the most important thing," he said.

"It keeps the motivation high. We manage to keep ourselves cool and then we obey the coach and obey ourselves. We trust ourselves and respect ourselves and we are having a great time now.â€

Ghana launch their Nations Cup campaign against Botswana on Tuesday and also have to deal with Guinea and Mali in Group D.