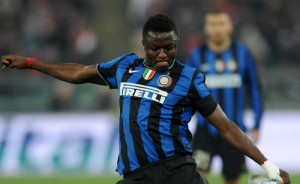 Ghana midfielder Sulley Muntari claims he is cool with his cameo appearances at Inter Milan and remains tight-lipped on his rumoured exit.

"I am with Inter, I want to stay with Inter. I have a contract with Inter and I am going to be there," Muntari said.

The 26-year-old has struggled to assert himself in the first team since Rafael Benitez took charge at the San Siro.

Muntari claims he is prepared to work hard to play a key role in the club's defence of the Serie A title, Coppa Italia and the Uefa Champions League trophies won last season.

"So far so good. Whatever comes your way have to take it like that. I just hope that everything will be fine. It's a big club but at least things are getting better. Everything that comes your way is part of life.

"I just train everyday and concentrate. I know that my time will come surely and I will make it."