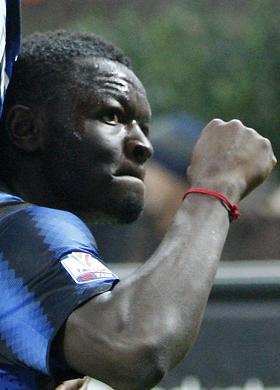 Ghana midfielder Sulley Muntari is set to be handed playing time in the Uefa Champions League after switching to AC Milan.Â

Muntari crossed from rival Milan side Inter who did not register him for the competition before the start of the season because of a reported move to Turkish side Fenerbahce in the summer.

He will provide much needed midfield cover for the Rossoneri after Alexander Merkel joined Mathieu Flamini, Gennaro Gattuso and Alberto Aquilani on the sidelines.

The 27-year-old made four appearances at Inter and could be revived by his former rival club.

He has struggled to keep up with the tempo in the two-games he has played for the Black Stars at the 2012 Nations Cup â€“ a deficiency linked to his lack of first team action at his club.