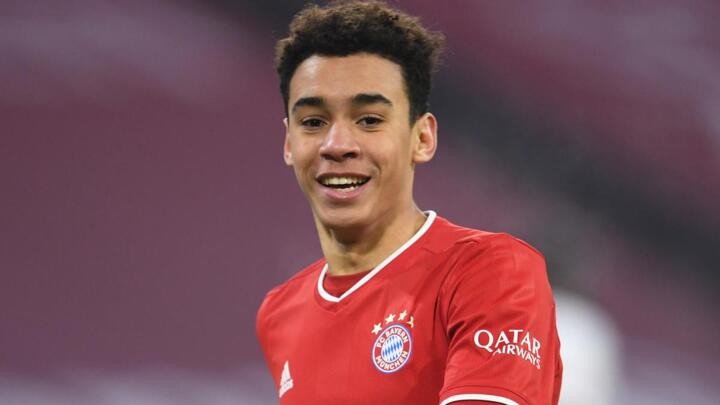 Rising Germany star Jamal Musiala has signed his first senior Bayern Munich contract, a week after turning 18, on a deal running until 2026.

Jamal Musiala has signed his first professional contract with Bayern Munich. The rising Germany star has pledged his future to the Bundesliga champions until 2026, just a week after turning 18.

Musiala has made swift progress since joining from Chelsea two years ago and has made 26 appearances in all competitions this season for Hansi Flick's side.

At 17 years and 363 days old, he became Bayern's youngest Champions League goalscorer when he netted in the 4-1 last-16 first-leg win over Lazio.

Musiala: "I'm playing with the best players in the world"

"I'm really pleased to have signed my first professional contract at FC Bayern," Musiala said via the club's website. "I just feel very good at the club and in the team, I'm playing with the best players in the world and I can learn from them every day in training.

"Hansi Flick, [sporting director] Hasan Salihamidzic and [chief scout] Marco Neppe, along with the whole club, have believed in me and given me the chance very early on.

"I just want to repay that faith with good performances, keep getting better and win a lot more titles with FC Bayern. My aim is to become an important player for this club."

Salihamidzic said: "We're very happy that Jamal has decided to sign his first professional contract at FC Bayern on a long-term basis. This has been a joint effort.

"Before Jamal came to FC Bayern in summer 2019, we had to and were able to convince him and his family about our project. I am very pleased that our system of finding talented players, developing them and then integrating them into the first team is bearing fruit.

"Our chief scout Marco Neppe has played a significant role here. Now we must all ensure that Jamal continues to be nurtured and challenged. I am sure that he will bring a lot of joy to FC Bayern."

Musiala, who last month declared he will play for Germany at senior international level, has been tipped for a call-up to Joachim Low's squad for the coming international break.