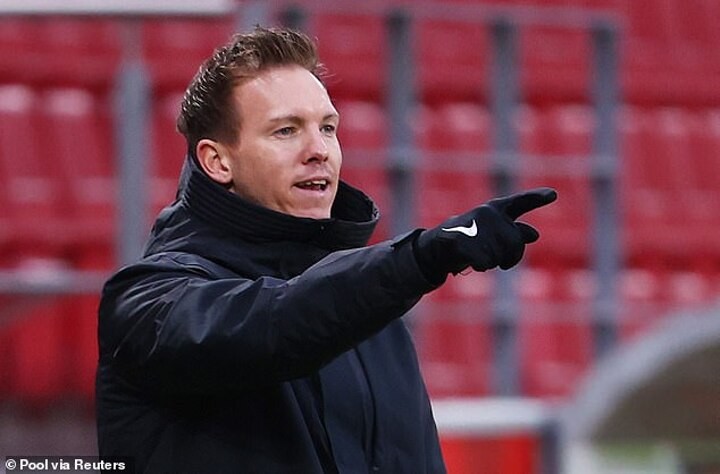 RB Leipzig boss Julian Nagelsmann has admitted he is 'flattered' to be linked with a move to Real Madrid, but claims the transfer speculation is not necessarily true.

Nagelsmann is said to be on the shortlist to replace Zinedine Zidane at Madrid as his job in the Spanish capital is on the line.

Zidane came under fire after a third-tier side - with only ten men -dumped his Real Madrid side out of the Spanish Cup at the last-32 stage.

Zidane has also faced criticism for the fact Real Madrid have only won one game from their last five games in all competitions.

This is not the first time Nagelsmann has been linked with a move to the LaLiga giants - having gained their interest in 2018 following an impressive season with Hoffenheim.

Speaking of the most recent links to Real Madrid, Nagelsmann told Sky Sport Germany: 'There are definitely worse things to read.

'But I also know that things that are written in the newspapers are not always true.'

This is the second time the Leipzig boss has been linked with a takeover at Real Madrid.

Nagelsmann turned down the opportunity to join Real Madrid in 2018, suggesting a move to the Bernabeu would not have been the 'right step' to take in his career at the time.

The Leipzig boss did, however, say he would be open to talking with the club in the future, should they require a new coach.

'We had phone calls, but in the end the one who decided was me,' he told Marca. 'I believed it was not the right step to go to Real Madrid.

'I was one of the candidates and the list was not very long. For me, that was important. I had a good chat with Jose Angel Sanchez and we decided that it was not the right step at that time.

'We agreed that we could talk again in the future if Real Madrid needed a coach – and I was available.'

Nagelsmann is a highly sought after manager - having established his credentials with Hoffenheim and Leipzig.

Nagelsmann became the youngest manager in Bundesliga history when he took charge of Hoffenheim in 2016 at the age of 28.

He even secured Champions League qualification for the first time in the club's history.

Following such success, the German was appointed RB Leipzig boss in June 2019 and led the club to a third-placed finish in his first season at the helm.