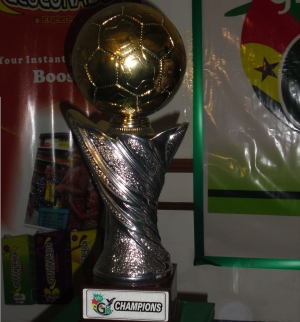 The second-tier side face last season's Premier League runners-up AshantiGold in their Group B opener on 11 September before facing off-season big-spenders Medeama SC and Liberty Professionals.

The pool of teams will play all three matches each at the Essipong Stadium.

Nania FC will have to prove that winning the FA Cup was no fluke and the club's owner and head coach Abedi Pele must repeat his magic.

Ghanaian champions Berekum Chelsea have a difficult assignment against dethronedÂ  champions Aduana Stars in Group A.

Before that mouth-watering tie on 17 September, Chelsea will open their campaign against New Edubiase on 10 September and then Heart of Lions four days later.

The Sunyani Coronation Park will host the quartet.

The Glo G8 Cup competition will be played from 10-25 September.

Group winners will face runners up in the semi finals which will be played in Accra and Kumasi stadia.

The team which emerges victorious in the maiden edition of the pre-season tourney will bag a cumulative 52,500 Ghana cedis (US$ 35,000).

Below are the groups, fixtures and corresponding dates: