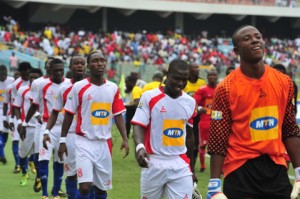 Ghana Under-23 coach Akwasi Appiah has named three Nania FC players in his preliminary 30-man squad for this year's All Africa Games, GHANAsoccernet.com can exclusively reveal.

Captain Lawrence Lartey, shot-stopper Goalkeeper Michael Sai and Prince Baffoe, who were influential for the second-tier side in their historic MTN FA Cup triumph caught the eyes of the national handlers.

The trio will join the rest of the squad expected to begin camping on 1 August in Accra.

Egypt-based Samuel Afum is the only foreign-based player named in the provisional squad.

Left-back Seth Owusu, a returnee from Major League Soccer side Chivas, has been called up with the unavailability of regulars Samuel Inkoom, David Addy and Daniel Opare.

Accra Hearts of Oak duo of Mahatma Otoo and Uriah Asante has also been invited.

Ghana are in Group B alongside defending champions Cameroon, Senegal and Uganda at the multi-sport Games which runs from 3-18 September in Maputo.

The Black Meteors failed to progress from the Group stage at the last edition in Algeria four years ago.