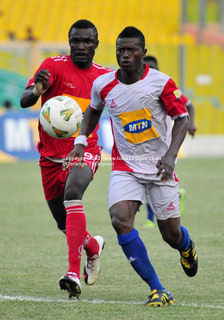 Nania FC midfielder Prince Baffoe is in Kumasi to finalize his move to Asante Kotoko, GHANAsoccernet.com can confirm.

The youngster was at the teamâ€™s training grounds Thursday morning to familiarize himself with his to-be teammates while being briefed on the clubâ€™s culture.

A contract has already been drawn up by Kotoko expected to be signed by the player this evening following fruitful talks with Nania FCâ€™s President Abedi Pele.

Once successful, Baffoe will become Kotokoâ€™s first January signing as the Kumasi-based club looks to bolster their squad to help maintain their lead on the Premier League summit.

The playmaker will also be reunited with Maxwell Konadu who was the assistant coach of the Ghana team that won the All Africa Games earlier this year â€“ Baffoe was a prominent member of that squad.