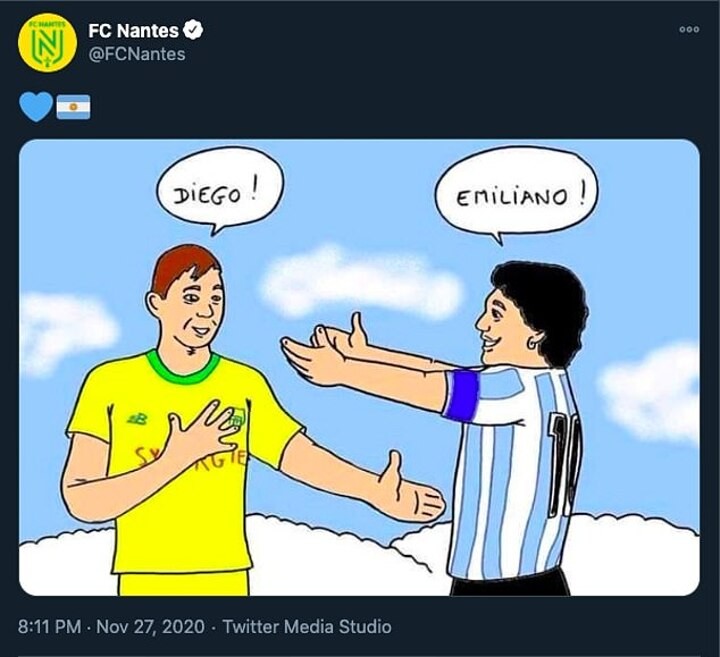 Maradona passed away on Wednesday from a heart attack aged 60 only weeks after he entered hospital for brain surgery the first week of November.

The club uploaded an illustration to their Twitter page depicting Maradona and former Nantes player Sala, who died in January 2019 in a tragic plane crash.

Sala is pictured in the clouds, representing heaven, and welcomes Maradona who greets him with open arms.

The tweet has been liked over 36,000 times and fans have flooded in with reaction as they remember the two former footballers.

One fan tweeted: 'Two stars who will be able to party together in paradise', whilst another said: 'it breaks my heart'.

However, the cartoon did split opinion among the thousands who engaged with it as one user tweeted: 'Something uncomfortable about this'.

Thousands of fans packed the streets around the presidential palace in Buenos Aires where Maradona lay in state on Thursday, and thousands more lined the highways in the afternoon to catch a glimpse of his hearse as it rolled past surrounded by police vehicles.

Football's biggest names such as Tottenham manager Jose Mourinho have paid their respects to the former World Cup winner.

'There is Maradona and there is Diego. Maradona I don’t need to speak about because the world knows and nobody will forget,' Mourinho told BT Sport.

'I can say he was a good friend of mine, but my contacts with him were by telephone and we met of course a few times.

'He had a big, big, big, big heart. That’s the guy I miss, because his football we can find every time we miss him, if we Google we will find it. But Diego, no.'

Maradona was revered at Napoli after a seven-year stay from 1984-1991 where he led the side to two Serie A titles and a UEFA Cup.

Thursday night, outside the stadium which is set to be renamed the Stadio Diego Armando Maradona, thousands of fans laid flowers and sang the his name - and attacker Dries Mertens, who wears the No 10 shirt made infamous by the Argentine, was similarly emotional when speaking after Napoli's 2-0 win.

'It was an awful moment for me, so I can only imagine how those who lived through his time at Napoli must have felt,' Mertens told Sky Sport Italia.

'He made such a big impact on this city and for everyone in the south of Italy. I want to be positive, and focus on my memories of a smiling man who loved football.'

All the Napoli squad wore a 'Maradona 10' shirt before kick-off and Maradona's face was shown on the big screen throughout the entire match.