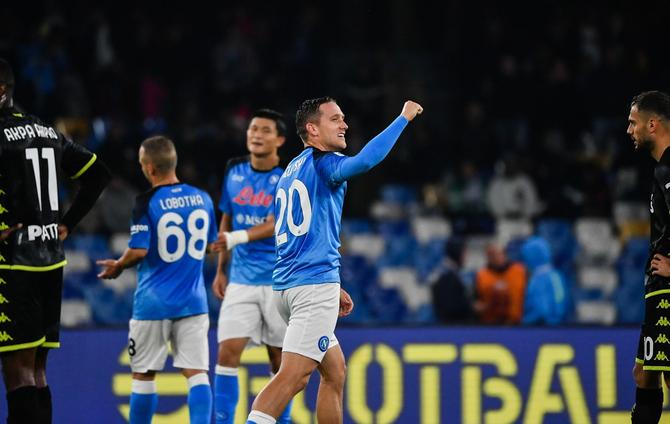 Hirving Lozano's 69th-minute spot-kick and a neat late finish from Piotr Zielinski ensured hosts Napoli made their way past a resilient Empoli side and moved further ahead of AC Milan.

Champions Milan are at winless Cremonese in Tuesday's late match knowing anything but a victory will leave Napoli with an ominous lead on the rest of the league heading into the final matches of 2022 this weekend.

Milan are without suspended stars Olivier Giroud and Theo Hernandez and a clutch of injured players at Cremonese, who sit just inside the relegation zone.

Empoli, who finished with 10 men as Sebastiano Luperto picked up a second booking shortly after Lozano's goal, stay 14th and five points above the relegation zone.

The Tuscans beat Napoli twice last season and all-but ended their title challenge in April when they came back from two goals behind to beat Luciano Spalletti's side.

And on Tuesday they frustrated Napoli, who were without injured wing wizard Khvicha Kvaratskhelia, for large periods of the match.

Napoli were awarded their penalty after Razvan Marin fouled Victor Osimhen, five minutes after the Nigeria striker had headed over the home side's only previous real chance.

Luperto's sending off effectively ended Empoli's challenge and Zielinski sent the Stadio Maradona into party mode with two minutes left when he perfectly met Lozano's cross with a first-time strike which opened his league account for the campaign.

Udinese's slump in results continued after drawing 1-1 at Spezia, their fifth draw in a six-match winless run which has left them eighth.