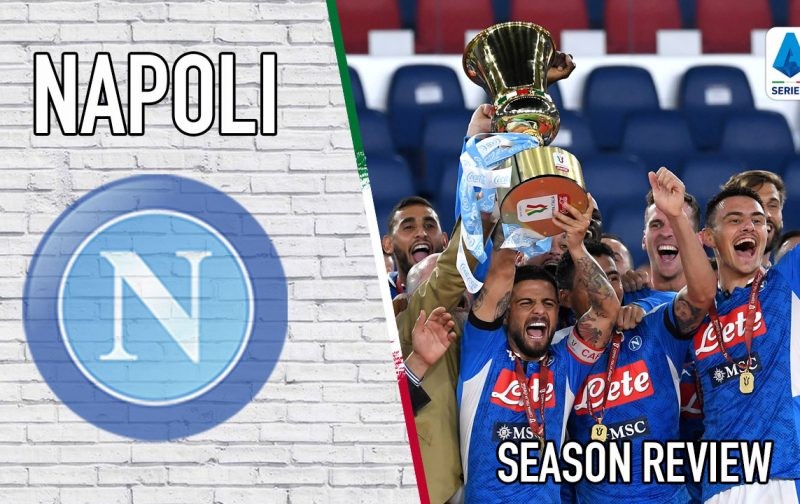 While Napoli still have the chance of lifting the 2019/20 Champions League trophy, failure to have qualified for European competition in any form, had it not been for their Coppa Italia, will be seen as a huge backward step for the club.

That success in the Stadio Olimpico shortly after Italian football returned from lockdown is one of the few reasons supporters had to smile, but even defeating Juventus in the final cannot hide that they were 21 points behind the champions in Serie A.

The Partenopei players refusal to attend an enforced training camp retreat insisted upon by president Aurelio De Laurentiis – who then threatened them with legal action – as early as November was the clearance indication that it would be an interesting year for the southern Italians.

Player of the Season: Dries Mertens The 33-year-old’s goalscoring output is starting to diminish as the years pass, but Napoli can still count on the Belgian international when needed – netting the decisive goal in their Coppa Italia second-leg aggregate victory over Inter.

Whilst crucial for their progression, that goal was even more important for Mertens legacy in Naples, becoming the club’s all-time leading scorer ahead of former teammate Marek Hamsik. The former PSV attacker ended the campaign with 16 strikes in all competitions and extended his lead in the record books to 125 goals. Despite impressing for Empoli as they were relegated from Serie A in 2019, there was no guarantee that Di Lorenzo would continue that form when making another significant step up the Italian footballing ladder, but has been a permanent fixture in the starting XI.

The offensively minded right-back has missed just five games in all competitions for the Partenopei this season and also made his international debut in a 5-0 Euro 2020 qualification victory over Liechtenstein in October. After Ancelotti’s disappointing start (more on that below), a player revolt and his exit highlighted something of a crisis at the San Paolo, therefore, Gattuso was seen as a steadying influence for the second half of the campaign.

However, the 42-year-old masterminded a triumph of tactical acumen against Juventus to lift the Coppa Italia on penalties, proved that his skills go beyond the organisation and discipline that he showed as a player. The two-time Champions League winner will no doubt be fancying his chances of delivering Europe’s biggest prize from the sidelines.

When football across Europe was halted, supporters’ primary concern was when competitive action would return and with the Coppa Italia beginning ahead of the Serie A restart, Napoli fans were rewarded for their patience by watching the Partenopei lift the trophy in Rome.

The victory over Juventus may have come on penalties, however, Napoli executed the plans of coach Gattuso near perfectly at the Stadio OIimpico and probably should have sealed the win in normal time. They would not be denied the one positive available to them during an underwhelming campaign. Progression to the Champions League knockout stages meant there were a few eyebrows raised when Ancelotti was disposed of mid-December, not just his own famously expressive brow, but it would have ignored the terrible domestic run that the side were experiencing.

From September 30 until the former AC Milan tactician’s departure, the side won just once in Serie A – a 2-0 victory against Hellas Verona – and plummeted from fourth position to eightth, and never really recovered from that poor run of form.