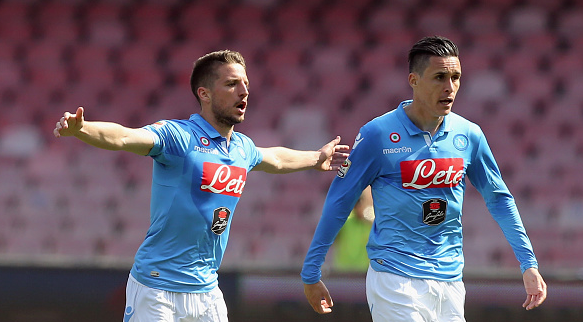 Napoli completed a 6-0 drubbing of Bologna at the Stadio San Paolo in their Monday evening Serie A meeting.

Manolo Gabbiadini scored twice in the first half, Dries Mertens bagged a hat-trick in the second half and David Lopez scored a sixth.

The first chance of the game came for the home side, captain Marek Hamsik coming close with a swirling effort from over 20 yards; Antonio Mirante able to palm the ball away for a corner. However the home supporters didn’t have to wait much longer for the opener, an exceptional ball from Dries Mertens finding Manolo Gabbiadini, who ran across the face of goal and poked the ball past Mirante.

Napoli then had a double chance, both involving the same player: Raul Albiol. The Spaniard was able to get his header in on target, but not enough power to beat Mirante. Then the defender threw himself at the ball in the area, but his shot was wayward. A second goal seemed inevitable, and sure enough Kevin Constant fouled Jose Callejon in the box, Gabbiadini planting the spot kick in the corner.

Mertens had the last chance of the half, cutting inside and firing low and hard at Mirante, but the Italian shot-stopper saved it with ease. After the restart the Belgian bagged the third of the game, turning Ibrahima Mbaye back and forth before powering the ball between the legs of Mirante.

Mertens then exchanged quick passes with Omar El Kaddouri before tapping past Mirante in front of goal, before completing his hat-trick with a superb powerful effort straight at Mirante that the Italian couldn’t stop. David Lopez then found himself one-on-one with Mirante and made no mistake, slotting past the miserable goalkeeper to complete a massive win at the Stadio San Paolo.