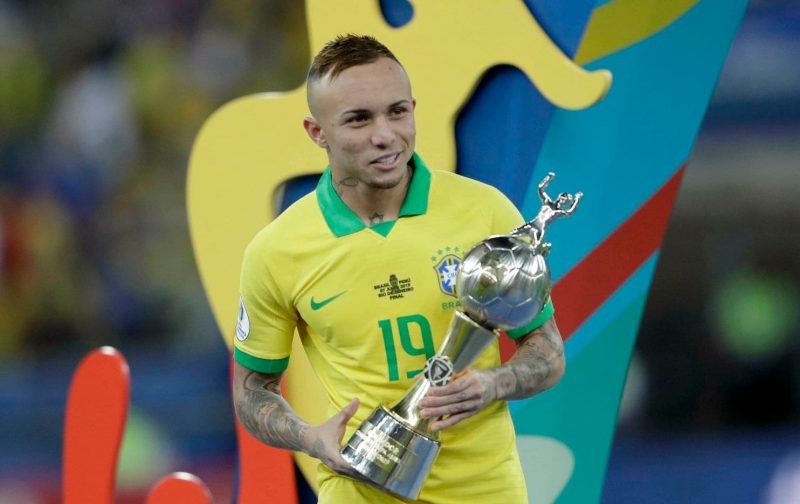 AC Milan have been joined in the pursuit of Gremio forward and Brazil international Everton by Serie A rivals Napoli, as the Partenopei look to strengthen their attacking options.

The 23-year-old starred as Brazil lifted the Copa America on home soil earlier this month, and was named man-of-the-match in a scoring display during a 3-1 victory over Peru in the final. Having confessed to being tempted by long-term admirers Milan in the wake of the victory, ANSA report that Everton is set to sign for the Rossoneri’s rivals in Napoli instead.

Returning to Gremio following his star turn on international duty, the forward is thought to be disgruntled in Porto Alegre and eager to secure a move to Europe, although the 2017 Copa Libertadores champions are holding out for at least €40 million and enjoy the luxury of a stable financial position, removing any need to sell.

Despite interest from Atletico Madrid, it is believed that Napoli are ready to table a €35m bid for Everton, in addition to a further €10m in bonuses.

Any move is complicated by ownership issues surrounding the player nicknamed ‘Cebolinha’ due to his resemblance to a popular Brazilian cartoon character.

Indeed, Gremio only own 50% of his transfer rights, with 30% belonging to agent Gilmar Veloz and a further 20% of any fee owed to former club Fortaleza. The remaining 10%, meanwhile, belongs to coffee tycoon Celso Rigo.

Everton has spent his entire professional career with Gremio and has scored 49 goals in 210 appearances for the Imortal Tricolor.