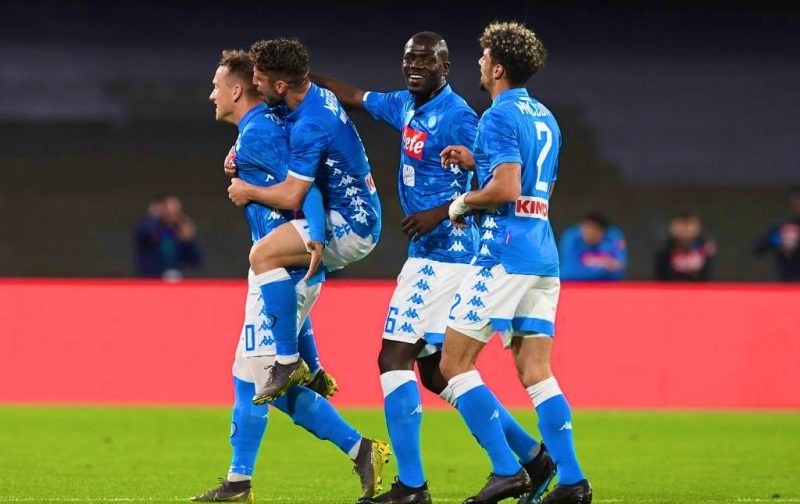 Inter will look to clinch their place in next season’s Champions League on the final day of the season as they were torn apart in a 4-1 defeat to Napoli on Sunday.

Luciano Spalletti’s men entered the contest knowing that three points would be enough to seal their place in the competition, but aside from the opening 10 minutes of the match, the Nerazzurri always looked second best as goals by Piotr Zielinski, Dries Mertens and a brace from Fabian Ruiz highlighted the Azzurri’s dominance on the night.

Mauro Icardi scored a late penalty that changed little, meaning Inter must now win their final game of the season against Empoli – who need three points themselves to avoid relegation – to ensure their place in the top four.

Mertens got things started with the first chance of the game, but he was unable to keep his finish from close range down.

It didn’t take long for Napoli to open the scoring and they did so in spectacular fashion. Zielinski collected a loose ball outside the Inter penalty area, and he unleashed a missile from 20 metres out that thumped the far top corner.

Despite bossing possession, Inter had little to show for it in terms of chances – Radja Nainggolan and Matteo Politano both fired from distance but were well off target as the half closed with the Nerazzurri behind.

Icardi came on for Matteo Politano at half-time, and while the move certainly made things more interesting, it was Napoli who doubled their advantage in the 61st minute.

Callejon played a wonderful cross in from the right, and Mertens found space behind the Inter backline to head past a helpless Samir Handanovic.

Inter finally responded with some tidy buildup play in the 66th minute. The ball eventually fell for Danilo D’Ambrosio, and his left-footed strike was palmed away by an alert Orestis Karnezis.

Koulibaly showed his worth with an exceptional goal-line clearance off the resulting corner. Lautaro Martinez’s strike was already past Karnezis, but the defender managed to head the ball over the bar in the nick of time.

It was 3-0 soon after when Handanovic denied Milik from point-blank range, only for Kevin Malcuit to pick out an unmarked Fabian Ruiz in the box who slotted into the open net.

Fabian Ruiz netted a fourth minutes later after running on to a Mertens ball that he lashed in from nine yards out, while Icardi won and slotted home a late penalty that did nothing to take away from Inter’s poor performance on the night.