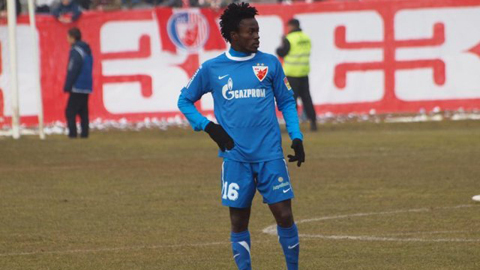 The speedy forward signed a four-year contract on Monday after impressing coach Robert Prosinecki on a two-week trial session.

He scored a consolation in one of the club's friendly matches on their tour of neighbouring Montenegro.

Asamoah, who scored five goals for Asante Kotoko in the first half of the Ghana Premier League season, wants to play a big role in the club's season.

"I will not promise anything. I hope to contribute to the goals to achieve team victory," Asamoah said.

"It is more important to win than me scoring. I will try to justify the maximum expectations."

Asamoah believes he will take very little time to adjust in the Serbian capital.

''Belgrade is a nice place. I saw the stadium, it really is impressive. In Montenegro, I became acquainted with the fact that Red Star has a loyal fan. I have come to a big club.''

The second round of the league will begin on 3 March.