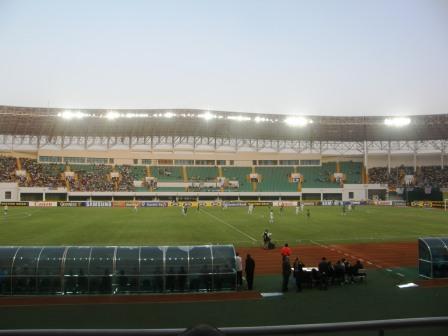 The Tamale Sports Stadium is highly unlikely to be a venue to host a competitive fixture of any of the national teams.

The stadium constructed in 2007 purposely to host the Nations Cup in 2008 is in grave danger of being a white elephant.

Its 20,000 capacity (half off what the national wembley in Accra and Kumasi hold) and remoteness is putting authorities off in deciding to stage a competitive game there.

â€œIt will be very difficult to have the national team play there considering the location and capacity,â€ Ghana FA Spokesman Randy Abbey told GHANAsoccernet.com.

â€œHave you seen the English national team play away from Wembley whenever itâ€™s available before?â€

This development is in direct conflict of what Ghanaians were made to understand during the construction of the stadium when fears of its sustainability were raised.

The previous NPP regime under whose watch the massive constructions took place explained to the public of a plan to rotate games around the four stadia to give all Ghanaians a feel of excitement associated with the national team.

But then only once has a competitive Black Star game been held outside Accra and Kumasi - at Essinpong which led to a stampede.

â€œPerhaps we can have some of the junior teams play there but even that with the experience of what happened at Essinpong, will be very difficult,â€ Abbey added.