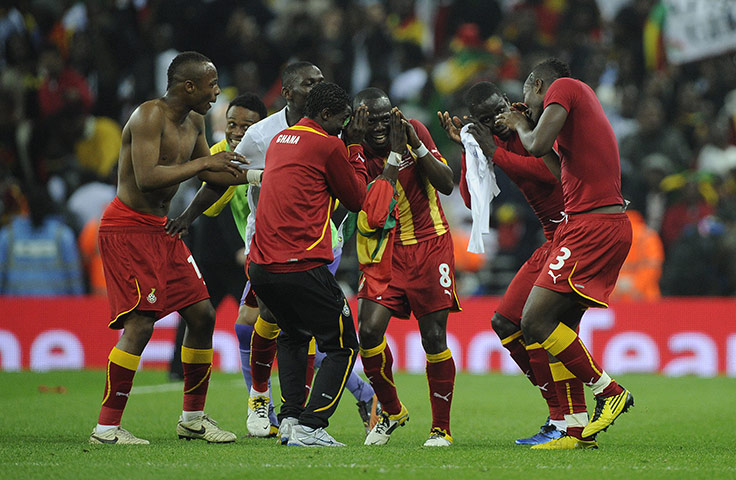 This was an indirect warning to former first choice Richard Kingson who is without a club after leaving Blackpool in May.

The 44-year-old will celebrate his first anniversary as Ghana coach in South Africa where he will be sharpening his arsenals for the much-anticipated 2012 Nations Cup.

And as he readies to announce his final 23-man squad for next January's showdown, not much surprises are expected with almost just three places in the team up for grabs.

Goran has expressed the taste for attacking football and appears to be interested in scoring more goals than two of his earlier brothers; Ratomir Djukovic and Milovan Rajevac.

Since taking charge as new coach in January, the former Partizan Belgrade coach has only fallen to Brazil and South Korea, a game which confirmed his exit from the team.

The Black Stars encountered just few difficulties overriding Sudan, Swaziland and Congo to book a ticket for Ghana's 18th appearance at the tournament. Sudan, who were fancied as a difficult opposition were thumped at their own backyard.

That last fixture was won with a touch of command and superiority over the North African but it doesn't matter if the team was convincing against Didier Drogba, Yahaya Toure and Abdul Kader Keita in a crucial international friendly.

And it will make no impact either if Isaac Vorsah and John Mensah were to hold the much-dreaded Demba Ba.

Anticipation at home have been raised by the fact that neither Egypt nor Cameroon is making an appearance.

GFA President Kwesi Nyantakyi said in late November that the Serb will not automatically be axed if he fails to deliver the trophy to Ghanaian.

But 'Plavi' will still face condemnation from local fans in that even but what would be even more highlighted would be that unbroken duck; no expatriate has ever won a major trophy for Ghana.

Asamoah Gyan, Prince Tagoe, Jordan Ayew and Derek Asamoah must all be on the plane to Franceville by form guide. Jordan Ayew, 20, must upstage Dominic Adiyiah for a place in attack after putting together a string of impressive displays for Olympique Marseille. If people will question why, Jordan has been one of the most important players for Marseille's season playing more matches than any other player at the club. By statics and form guide, Dominic Adiyiah has scored just three competitive goals at club side since 2009. At Karsiyaka in the Turkish second-tier, the 21-year-old has not scored in his 8 appearances out of 14 games played this season.

Asamoah Gyan seems to be picking up the pieces at the Asian peninsula. He would score more after netting six out of six games. In a case where 'Plavi' abandon his tradition of one attacker upfront, Prince Tagoe can arrowhead while Gyan plays from behind. Jordan Ayew could be another option in a double attacking play system. At 30, strikers who do not have illustrious careers don't dream about national team football but it seems Pohang Steelers' attacker has defiled this tradition. His winner against Gabon in Paris could confirm his place in the Ghana team.

With our somehow over reliance on midfielders for goals, I would pick these midfielders for the finals. Derek Boateng, Quincy Owusu-Abeyie, Agyemang-Badu, Kwadwo Asamoah, Mohammed Abu, Sulley Muntari and Anthony Annan. I would leave Albert Adomah and Charles Takyi at home for two reasons. Takyi has experienced a dip in form at St Pauli and played few games this term for the relegated side. I think Albert Adomah is still struggling to find his feet with the Black Stars. He struggled to impress against Brazil at the Craven Cottage. There will be a solid combination when Derek and Badu are paired in central midfield with Andre Ayew and Quincy Owusu-Abeyie assigned to the flanks while Kwadwo Asamoah spraying around in a free midfield role. Annan, Muntari and Abu could be better substitutes.

Lastly in defence, I pick Opare for his work-rate showed in his last three or so games for the team from a makeshift left-back role. Harrison Afful must also come in for the youngster Massawudu Alhassan. Captain John Mensah as well as John Pantsil must be at Equatorial Guinea and Gabon for their experience. There is also alternative comfort in Jonathan Mensah, Isaac Vorsah. Samuel Inkoom though right-back can be effective at for a right-wing option. Lee Addy must also made the trip. What this means is that Sumaila Rashid, the Ebusua Dwarfs defender must watch from the TV while Nana Asare who has been impressive for FC Utrecht monitor events from his base in Utrecht. John Boye and Massawudu Alhassan can hold on for the next edition.