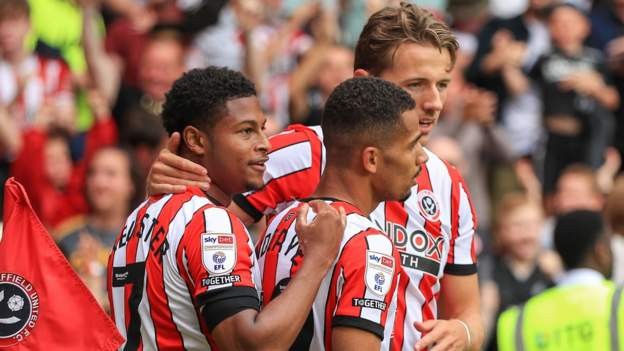 Sheffield United bounced back from an opening-day defeat with a comfortable win over Millwall at Bramall Lane.

After struggling to create chances in defeat at Watford, Iliman Ndiaye gave the Blades an early lead, planting a firm right-footed shot into the corner of the net.

And midway through the first half it was 2-0 when John Fleck seized on Charlie Cresswell's poor miscue and squared to Sander Berge who rounded goalkeeper Bart Bialkowski and slotted in.

Having failed to find the target and struggled to carve out chances in defeat at Watford, the Blades had Manchester City loanee James McAtee on the bench and were 2-0 up and cruising by the midway stage of the first half.

Lions defender Cresswell, on loan from Leeds, had been the two-goal hero of an encouraging 2-0 opening-day win, but discovered how quickly fortunes can change with a glaring mistake for the Blades' second goal.

His blushes were spared by a diving penalty save from Bialkowski who had earlier done well to block a close-range strike from debutant defender Anel Ahmedhodzic.

The Lions were knocked out of the EFL Cup at League One side Cambridge in midweek and huffed and puffed for a way back after the break.

Attempt missed. Murray Wallace (Millwall) left footed shot from the right side of the six yard box is too high following a set piece situation.

Isaac Olaofe (Millwall) wins a free kick in the attacking half.

(Millwall) wins a free kick in the defensive half.

Attempt missed. Benik Afobe (Millwall) left footed shot from the centre of the box is high and wide to the left.

Attempt blocked. Tyler Burey (Millwall) right footed shot from the right side of the box is blocked. Assisted by Billy Mitchell.

Attempt missed. Ben Osborn (Sheffield United) right footed shot from the right side of the box misses to the left. Assisted by George Baldock.

Attempt missed. Ben Osborn (Sheffield United) header from the centre of the box misses to the left. Assisted by Billy Sharp with a cross.

Ciaran Clark (Sheffield United) is shown the yellow card for a bad foul.