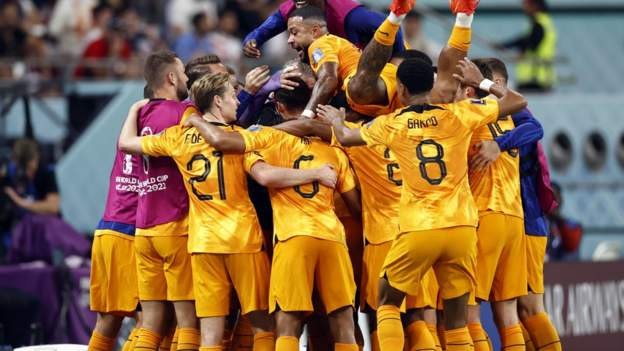 The Netherlands survived a late scare against the United States to move into the World Cup quarter-finals with a ruthless display of finishing.

The US had the game's biggest early chance when Christian Pulisic was denied by the legs of Dutch goalkeeper Andries Noppert and the failure to take that opportunity proved highly expensive.

Louis van Gaal's side responded in the finest Dutch traditions in the 10th minute when Memphis Depay crowned a magnificent 21-pass move by turning in Denzel Dumfries' cross.

The US battled hard but lacked a cutting edge and were punished once more in similar fashion with the final kick of the first half when Daley Blind arrived with perfect timing on the end of another Dumfries cut back.

The Dutch were given anxious moments when the US pulled a goal back in the 76th minute as Haji Wright's freak deflection from Pulisic's cross looped in at the far post.

But they restored their two-goal lead five minutes later when creator Dumfries turned scorer, side-footing in a volley at the far post from Blind's cross.

Van Gaal has been over this course before with the Netherlands, when he guided them to a World Cup semi-final in Brazil in 2014, only to lose on penalties to Argentina after a goalless draw in Sao Paulo.

And his vast experience means they cannot be under-estimated here as they set up a last eight meeting with either their 2014 conquerors Argentina or Australia, who meet at 19:00 GMT on Saturday.

No-one would pretend this is a classic Dutch side but they have a sprinkling of quality in all areas and the beauty of their first goal, which would have delighted the purists in their homeland, was a graphic demonstration of their capabilities.

Virgil van Dijk is the world-class defensive leader alongside Nathan Ake, while both full-backs Blind and Dumfries made crucial contributions.

It was a display that delighted the band of Dutch fans inside Khalifa International Stadium as Van Gaal's side march on.

Pulisic miss proves costly The USA have failed to win all 24 World Cup matches in which they conceded the first goal of the game, losing 19 times in the process

The States' main man Christian Pulisic looked close to tears after the final whistle as he reflected on the chance that got away in those opening moments, an opportunity that might have made this a very different tie.

Pulisic was sent through on goal by Tyler Adams' clever delivery but the outstretched leg of Dutch keeper Noppert made the block. Pulisic should have scored and he knew it.

The US were soon in arrears and could never get close enough to the Netherlands, apart from Wright's goal, which was heavily laced with good fortune.

The left side of their defence was brutally exposed by the Dutch for all three goals and this, mixed with poor finishing, meant their World Cup ends in the first knockout round.

There is something to build on after getting out of the group stages but there will also be disappointed at the sense of missed opportunity as they make their departure from Qatar and start their preparations for the 2026 World Cup, which they will be co-hosting.

Attempt blocked. Yunus Musah (USA) right footed shot from the centre of the box is blocked. Assisted by Giovanni Reyna with a headed pass.

Nathan Aké (Netherlands) wins a free kick in the defensive half.

Attempt blocked. Giovanni Reyna (USA) left footed shot from the right side of the box is blocked. Assisted by Brenden Aaronson.

Frenkie de Jong (Netherlands) is shown the yellow card for a bad foul.

Brenden Aaronson (USA) wins a free kick in the defensive half.

Attempt missed. Walker Zimmerman (USA) right footed shot from the centre of the box misses to the left following a corner.

Xavi Simons (Netherlands) wins a free kick in the defensive half.

Giovanni Reyna (USA) wins a free kick in the attacking half.