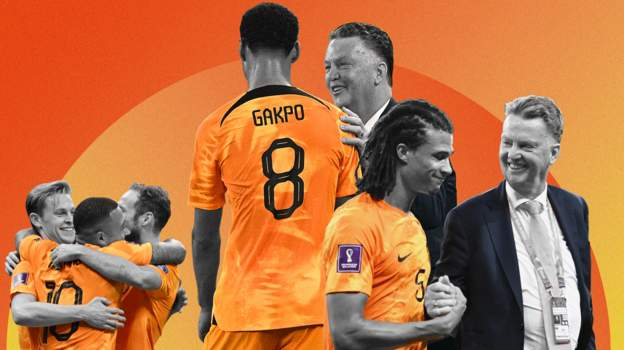 Louis van Gaal is one of the most decorated managers in football, but his biggest challenge has been off the pitch since being diagnosed with cancer nearly two years ago.

The Netherlands boss revealed in April he had an aggressive form of prostate cancer, which he had hidden from his players in an effort to maintain their focus before the World Cup.

Van Gaal lost his first wife, Fernanda, to cancer in 1994 when she was 39 and given what the 71-year-old has faced in the build-up to the Netherlands' campaign in Qatar, when his side line up for their quarter-final against Argentina on Friday (19:00 GMT), it will be a significant moment.

Known as the "Iron Tulip" by many, Van Gaal has a strong mentality and firm leadership style. He is the son of a salesman, was brought up as a Catholic and once worked as a PE teacher.

He has won 20 major trophies as a manager, working at clubs such as Barcelona, Bayern Munich and Manchester United, and also had three stints in charge of the Dutch national team.

At 71, he is the third-oldest manager at a World Cup and is a leader and a father figure for his Netherlands players in Qatar. However, until recently, he was keeping a significant secret from them.

When he revealed to Dutch TV programme Humberto in April he had an aggressive form of prostate cancer, he said he had only told close friends and relatives.

"I was given special treatment in the hospital. I was allowed to go in through a back door and immediately put into another room," he added.

"I didn't want to tell it to my players because it could have influenced their performances.

"In each period during my time as manager of the national team, I had to leave in the night to go to the hospital without the players finding out while thinking I was healthy, but... I am not."

Van Gaal was diagnosed with prostate cancer in December 2020. He had 25 sessions of radiation therapy, all while overseeing the Netherlands' World Cup qualification campaign.

His decision to reveal the news in April came less than a year after Van Gaal had come out of retirement to lead the Dutch to Qatar despite telling his wife, Truus, that he would not return to the game.

During their 2-0 win over Norway, a World Cup qualifier in Rotterdam on 21 November 2021, Van Gaal was in a wheelchair.

"Of course it is in the back of our heads. From the first moment, we didn't know about it. He did everything he could to keep it from us," Netherlands defender Daley Blind told BBC Sport.

"He was even going to the hospital during the nights, so as not to show the team what he was going through.

"We have so much respect for how he is coping with this disease at the moment. But he is as sharp as usual. He is Louis van Gaal and he will never change. What you see is what you get."

'We want to play for our coach'

Van Gaal is a popular character in Qatar.

Some reporters were asking for photosexternal-link and shaking his hand after his first news conference, while a young journalist later got a hug from himexternal-link.

He is well-liked by his players too.

Reports from the Dutch camp suggest Van Gaal remains a strong leader but his health struggles mean he shows more empathy and listens to his players more closely now when they talk to him about personal issues.

"He is a great personality and we are very happy that he is with us. He always knows how to [inspire] players," said Blind.

"It's in the back of our heads, but we don't need any extra motivation. We want to win every game, we want to play for our coach and we want to go as far as we can."

Van Gaal's side remain unbeaten in Qatar after they won Group A, before beating the United States 3-1 in the last 16.

But there has been criticism of the performances, with some calling Van Gaal's tactics "too negative" and "boring".

Van Gaal responded by saying it was "winning football" and his side responded perfectly with a superb, 20-pass build-up to Memphis Depay's goal in the win over the USA.

"Dutch football has always been attacking football, but the numbers have been a bit less. I would not judge the potential of the Dutch team until now," he added.

"[Van Gaal] has huge experience. Before he came back, the Netherlands struggled - so he has something special. I have huge respect for that." Uefa EURO 2024

Ronald Koeman will take over the Netherlands for their 2024 European Championship qualifying campaign, in which they will come up against reigning world champions France.

But before that, Van Gaal is hoping to go out on a high.