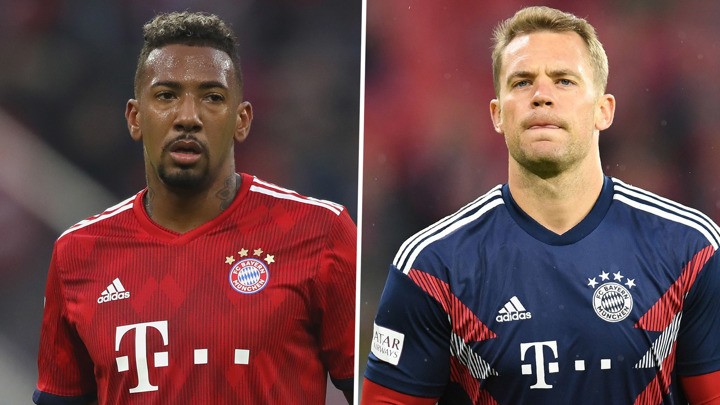 Hansi Flick is hoping to see Manuel Neuer and Jerome Boateng follow his lead by committing to extended stays at Bayern Munich.

The Bundesliga giants have handed a permanent contract to a coach initially appointed as successor to Niko Kovac on an interim basis.

They have also thrashed out fresh terms with Thomas Muller and now have the Bavarian native tied to a deal through to 2023.

It is hoped that a couple of other World Cup winners will also put pen to paper in the near future, while discussions remain ongoing with the likes of Thiago Alcantara and David Alaba.

Flick told reporters of experienced centre-half Boateng, who did spark transfer talk earlier in the season as he struggled for regular game time: “We are all happy with his development.

“We can support him as a coaching team, but it always depends on what he offers. In this regard, his development has been very positive.

“We will do everything possible to do the contract if he decides to stay here. He has had our support so far and will continue to do so in the future.”

He added on the others who are approaching the final 12 months of their current deals: “These are also decisions that every player has to decide for themselves.

“In the past weeks and months, I have already explained how important Manuel Neuer, David Alaba or Thiago are to us.

“They have undergone enormous developments over the past six months and were real top performers. The club also noticed that and I hope that it goes in the right direction.”

Long-serving goalkeeper Neuer has seen it suggested that, at 34 years of age, he could be moved on in the next transfer window.

Flick said of an important figure in his plans: “I have known Manuel for so long. We get along well, we appreciate each other very much.

“It is his decision, he also knows what he has at Bayern. Not just me, the whole club would be happy if he would extend.”

Muller is also locked down for the next three years, with Flick delighted to see an agreement reached there.

He added: “I'm glad that Thomas has extended.

“Of course I'm also happy about my extension, so that we can work the next few years with the entire coaching team.”

Flick is calling the shots at the Allianz Arena and will get the final say on any transfer business completed by Bayern both in and out over the coming months.

On that privilege, he said: “A right of veto is quite normal, that was also the case with the coaches who were here before me.

“Of course, we are currently also discussing team planning together. But that's internal - as it should be. We have to wait and see what happens next.”