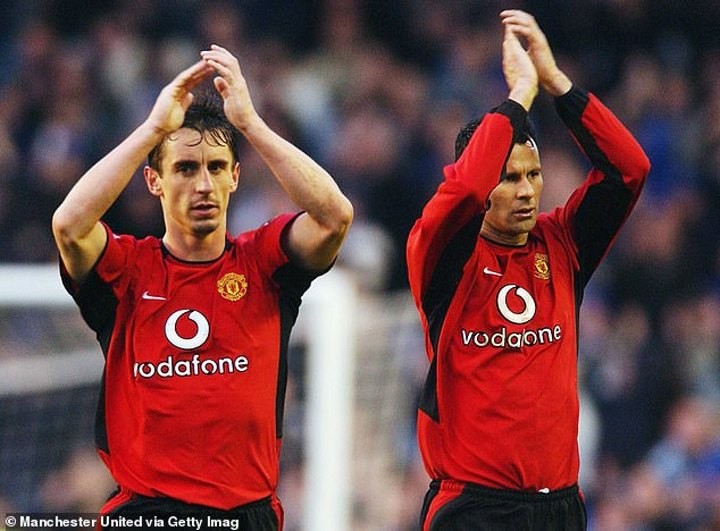 Gary Neville has revealed how former Manchester United team-mate Ryan Giggs used to eat his toast without butter 'to get that extra 0.01 per cent' when he felt he wasn't in form.

The pair were both members of United's famous Class of 92 and would become stalwarts in Sir Alex Ferguson's highly successful team for over 15 years.

Neville was reflecting on how Glenn Hoddle changed the culture of the England squad when he replaced Terry Venables as manager in 1996 and was years ahead of the curve when it came to such details as diet and nutrition.

Speaking on The Football Show on Sky Sports, Neville said: 'With Glenn, you weren't allowed butter on your toast, weren't allowed milk with your cereal in the morning, things like that.

'I remember Giggsy later in his career, when we were starting to learn about nutrition, and I asked him, 'what would you do if you were in bad form?'

Such strict rules on diet and nutrition to acquire marginal gains in performance have become a major part of the game nowadays, but were rare in the 1990s.

However, Neville was less keen on some of Hoddle's other rules in the England camp, which were in stark contrast to the more relaxed attitude of his predecessor Venables.

He added: 'The bar of chocolate that Doctor [John] Crane used to bring round under Terry, all of a sudden went, all the little things and you missed those things.

'You couldn't go to the shop, the masseur had to go for you and get a magazine or a book, and it felt quite claustrophobic at times compared to what I'd experienced with Terry.

'Glenn was almost like an Italian-like coach. [Fabio] Capello was apparently the same when he came in.

'Glenn had worked in Monaco, had an eye for detail and his coaching sessions were outstanding and the way he wanted his team to play was fantastic, we passed the ball brilliantly, kept possession but it was that off the pitch bit I found difficult compared to Sir Alex and Terry previously.'

Giggs, now coach of Wales, enjoyed an astonishingly long career, making 963 appearances for United between 1991 and 2014.