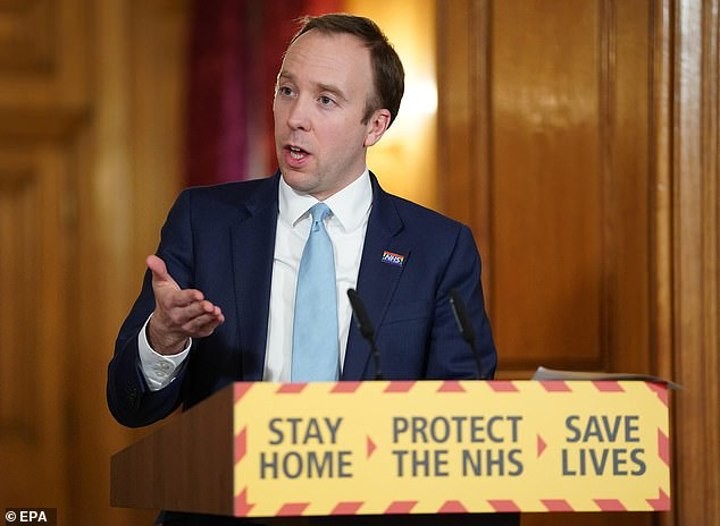 Gary Neville has slammed Secretary of State for Health and Social Care Matt Hancock on Twitter for suggesting Premier League footballers should take pay cuts during the coronavirus pandemic.

Hancock said top flight footballers needed to 'make a contribution, take a pay cut,' with many clubs facing financial difficulties due to matches being suspended.

However, Neville said his statement was 'a f****** cheek,' and proceeded to criticise the lack of virus testing for NHS staff.

‘Given the sacrifices that many people are making, including some of my colleagues in the NHS who have made the ultimate sacrifice getting into work and have caught the diseases and sadly died, I think the first thing Premier League footballers can do is make a contribution, take a pay cut,’ said Hancock.

Neville responded in an incendiary tweet, saying: 'I wish I was a player for 10 more mins. The PL players are more than likely working on a proposal to help clubs, communities and the NHS. It takes longer than 2 weeks to put together.

'Matt Hancock calling them out when he can’t get tests in place for NHS staff is a [email protected]@@@@g cheek!'

The Professional Footballers' Association refused to back down on Thursday over Premier League salaries. In a statement, the organisation insisted that there would be no pay cuts for players to ease financial pressure, saying: 'If clubs can afford to pay their players and staff, they should.'

Hancock is just one of a number of people calling for footballers to take pay cuts, especially with some clubs such as Tottenham and Newcastle taking advantage of the government's job retention scheme to furlough non-playing staff at the expense of the taxpayer, while the players still get big salaries.

Earlier in the day the chair of the Department of Culture, Media and Sport select committee, Julian Knight, called on the Government to impose a windfall tax on clubs who refused to cut wages.

The PFA accused clubs who have furloughed staff of damaging society simply to protect the wealth of their shareholders.

‘The players we have spoken to recognise that the non-playing staff are a vital part of their club and they do not want to see club staff furloughed unfairly,’ read the statement. ‘Any use of the Government’s support schemes without genuine financial need is detrimental to the wider society.'

Thursday night's developments have left players open to criticism. But privately players are known to be well aware of their roles in society and are 'keen to play their part'.

Sources were claiming that a collective of top-flight footballers were discussing secret plans to make their own private donations to help in the war against the Coronavirus.

As yet, no Premier League players have had their pay cut. However, Bournemouth manager Eddie Howe became the first top flight boss to take a pay cut in an attempt to help matters on Wednesday, with Brighton's Graham Potter following suit on Thursday.