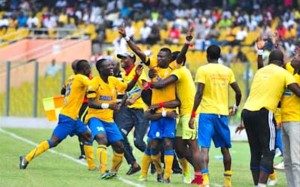 New Edubiase striker Prince Antwi is expected to appear before the Ethics Committee of the Ghana FA to back claims his side was involved in a fix match against Wa All Stars.

The young attacker made the sensational claim during an interview on radio.

He alleged his team was involved in a match of convenience after All Stars completed the double over them.

But it appears the striker will have a mounting to climb in backing those wild allegation with concrete evidence.

He could be faced with a heavy punishment if he fails to substantiate those claims.