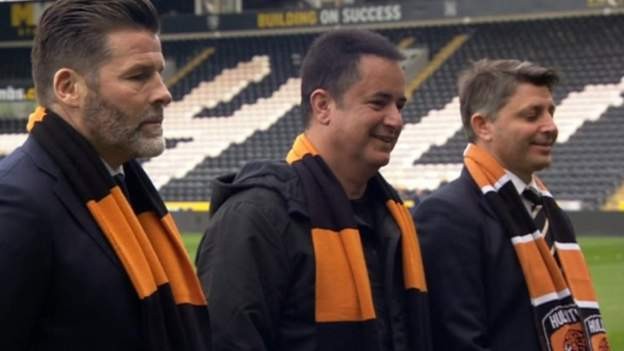 New Hull City owner Acun Ilicali wants to bring Premier League football back to East Yorkshire following his takeover of the Championship side.

The Turkish owner, whose Acun Medya Group has replaced the Allam family as custodians of the Tigers, met the media along with new boss Shota Arveladze.

Arveladze's appointment is Ilicali's first part of the plan for promotion.

"I'm here to achieve something that everybody would be very happy about," the 52-year-old said.

"In football, happiness comes from results. So the first thing [for Hull City] is good football, then results of course. I will be very, very happy if we come into the Premier League. By the way, I am here for that."

The Tigers side inherited by the ownership, and new boss Arveladze - who replaced Grant McCann this week - is nine points clear of the bottom three but 15 points outside of the play-offs.

While the immediate outlook might be to retain their Championship status, Ilicali's ambitions are grander.

"People are talking about relegation; I am thinking about promotion," he added.

"My brain always works for the positive, I always have positive thoughts and that makes me dream."

Ilicali and Arveladze have just days left of the transfer window to complete their business, but have already made moves to revamp the squad.

The owner says in-demand winger Keane Lewis-Potter will remain a Tiger, regardless of Premier League interest.

Hull want to keep hold of talent such as Keane Lewis-Potter, with the focus on incoming players

With the transfer embargo and restrictions around loanees at Hull now lifted, incomings will be kicked off with the arrival of Fenerbahce's Iran striker Allahyar Sayyadmanesh, subject to a medical.

"Our coach, I believe in his intelligence and his vision, and he said four [signings] is enough," Ilicali said.

"We don't want to just cut the future of our very young and quality players, in order not to close the way to the future."

Although Arveladze has not coached or played in England, he does have experience of the British game from his time in Scotland as a player for Rangers.

The 48-year-old Georgian is excited about experiencing the crowd at the MKM Stadium and the prospect of coaching in a competitive Championship division.

"I've been in the United Kingdom as a football player and I know how different it is here, how much adrenaline, tension and extra energy there is in the game in this country," Arveladze said.

"So I'm really looking forward to doing my best, showing my skills and again, to succeed."