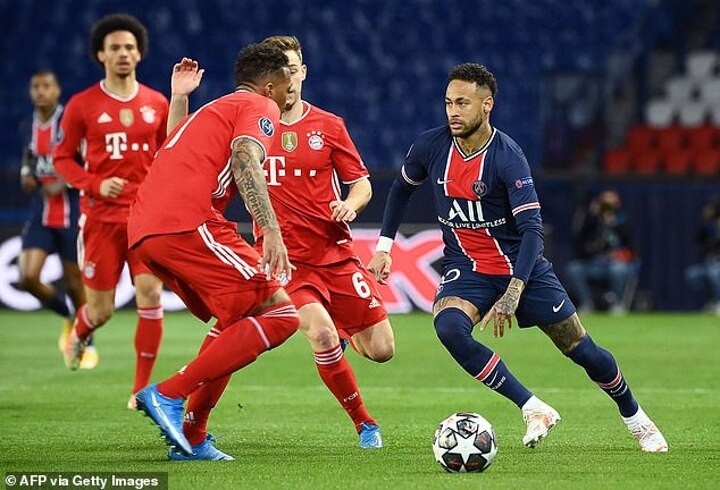 Love him or hate him, Neymar is an enigma. And at the moment, the footballing superstar is leaning on the right side of the balance between captivating and irritating.

On Tuesday, in a hell-to-leather Champions League quarter final second-leg against the holders, the Brazilian dazzled at the Parc des Princes.

Weaving in and out of Bayern defenders, cranking up the gears with effortless effectiveness, Neymar was in a league of his own when it came to panache on the ball - it was a refreshing throwback to the fleet-footed teenaged star who rose to prominence at Santos over 10 years ago.

In fact, the only thing that was missing was a goal.

He hit the post. He hit the bar. He laid countless chances on a plate for team-mate Kylian Mbappe.

Fortunately - by the slimmest of away goal margins - we will see them both in the semi-finals.

Could this now, finally, be the year Neymar and PSG crack the Champions League curse?

The Brazilian, of course, has won Europe's greatest prize back in 2015 with Barcelona, scoring in the final against Juventus in Berlin.

But since his record-breaking £198m move to Paris four years ago, claiming a Champions League crown has always been the ultimate goal.

In those years at the Parc des Princes, there's been horror-shows such as the bottling of a lead against Manchester United, but also some near-misses - none more so than last season's agonising defeat in the final to Bayern.

But for Neymar himself, Tuesday saw a return to the player who the whole world fell in love with.

He was the best player on the pitch, amongst a plethora of stars. More than that though, he oozed quality in just about everything he did.

Yes, he got fouled, many times. But there was a notable lack of histrionics and play-acting, the like of which we've been accustomed to seeing since the 2018 World Cup.

In Russia, Brazil were knocked out of the quarter-finals by Belgium. But it was a tournament more memorable for Neymar's rolling around on the floor and continuous feigning injury in an unnecessarily dramatic fashion.

It perhaps feels harsh to judge Neymar in this manner. After all, nearly every player does it.

But the forward in particular has found it difficult to rid himself of this tag. Especially when he wasn't performing to his max for club and country in the years since.

This week though, there was an outpouring of adoration for Neymar after his virtuoso performance. Slowly but surely, he is winning back fans with his displays.

Manchester City lie in wait in the final four, chasing a historic quadruple and inaugural European glory of their own.

Having knocked them out with Tottenham two years ago, it is a team PSG boss Mauricio Pochettino knows all-too well.

Speaking of which, Neymar finally seems to have found a coach who adores him, just the way he wants him to be adored.

Speaking after the game on Tuesday, Neymar spoke of his never-ending satisfaction for perfection.

'I still owed a goal,' he told TNT Sports Brazil.

'I told the mister (Pochettino) that I owed it, no matter how good I made a game. But I will do it (goal) in the semifinals.'

The Brazilian was even more definitive on the topic of his future, a discussion point so often awash with speculation about a return to Barcelona.

'I don't think this is even a topic anymore, I obviously feel very comfortable, at home at PSG. I feel happier than before.'

PSG chairman Nasser Al Khelaifi certainly believes Neymar - and Mbappe - are staying in Paris, telling RMC Sport: 'We have invested a lot in the club to win the Champions' League and all the trophies available.

'Neymar and Kylian (Mbappe) have no excuse to leave. We really have everything to win all the tournaments.

'We have a great team today. We have respect for the others but we are there with them. We are working. And it is not over. We need to continue, to remain calm because the Champions League is not finished.

It most certainly isn't. City next will the the ultimate test. But Neymar at his best could just swing the tie in PSG's favour - and make that elusive European crown even more tangible.