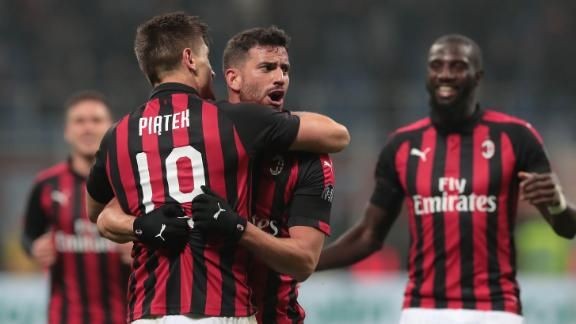 MILAN, Feb 10 (Reuters) - AC Milan's January signings Krzysztof Piatek and Lucas Paqueta were both on the scoresheet after an own goal put the hosts on the way to a 3-0 win over Cagliari and a return to fourth place in Serie A on Sunday.

Cagliari's Luca Ceppitelli could do nothing to avoid putting through his own goal in the 13th minute to open the scoring before Paqueta broke his Milan duck nine minutes later.

Piatek, who got 13 league goals for Genoa before joining Milan last month, scored just past the hour for his fourth in four appearances for his new club, finding the net against a 13th different Serie A opponent this season in the process.

Milan are again in fourth place with 39 points, four points behind Inter Milan in third but a point clear of AS Roma, Atalanta and Lazio, who are all in the hunt for a Champions League qualifying spot and won at the weekend.

The Rossoneri were therefore under pressure to deliver a result and they produced a dominant display against a Cagliari team that has not won away to Milan since May 1997.

Gennaro Gattuso’s side took the lead when Cagliari goalkeeper Alessio Cragno pushed Suso’s shot into the chest of defender Ceppitelli and it rebounded into his own net.

Paqueta, who joined Milan for a reported 35 million euros ($39.61 million) from Flamengo in the January transfer window, then tucked a shot into the net at the back post after a magnificent cross from full-back Davide Calabria.

Cagliari came close to pulling one back on the hour mark when Joao Pedro’s header was saved by Gianluigi Donnarumma, making his 150th Milan appearance, before the Brazilian’s follow-up effort came back off the crossbar.

Two minutes later Piatek put the result beyond doubt by finding the net through a crowded area after Cragno’s block fell in his path, leaving Cagliari in 15th place on 21 points.