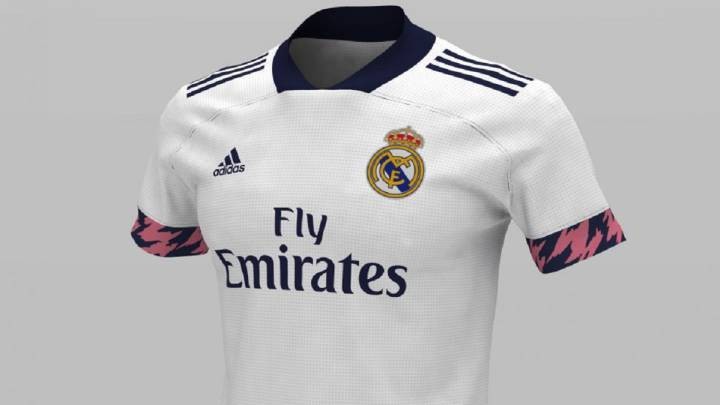 Real Madrid's first kit for next season features new detailing on the sleeves. As in recent seasons, the kit is produced by Adidas with 'Fly Emirates' as shirt sponsors.

The current season is far from over but details have started to emerge about the designs of the new kits which LaLiga teams will be wearing during the next campaign. Specialist web site Footyheadlines has revealed images of the kit which Real Madrid will wear during the 2020-2021 season. And that's not all, there are also computer-generated images of the players wearing the new strip in an Esports team in the Pro Evolution Soccer (PES) video game.

Real Madrid's new kit will continue to be produced by kits sponsors Adidas and will be the traditional all-white, featuring the logo of sponsors 'Fly Emirates' on the chest. The most eye-catching detail are the sleeves, which have an animal print trim in navy blue and pink. The crew cut collar is also in navy blue with three stripes running down each sleeve.

Madrid's second kit for next season, will see a return to the pink strip which the team wore for certain away games in 2014-2015, although it will be a departure from the coral pink colour worn that season. This time the jersey will be a lighter tone of pink with the badge and Adidas logo in white, the Emirates publicity on the front and back. The sleeves will have the same detailing as the first kit - navy and white animal print trimming on the cuffs.

The third kit, which will be used on occasion, if there is a colour clash with another club in the Champions League, will be all black with fuchsia trimming. The most striking feature of the shirt, apart from the colour combination is the mottled effect of the base colours of the shirt, black and charcoal grey.

The Footyheadlines web site has also leaked designs for the shirt which the Real Madrid squad will wear during the pre-match warm-up. The material is a very striking dark navy and pink tiger print, following on from the cuff design of the first and second kits. A shirt which will certainly get them noticed before kick-off.