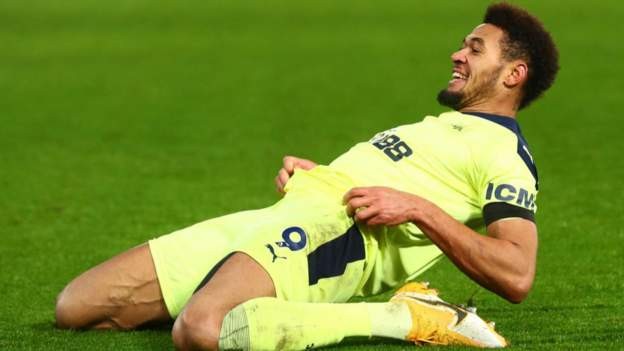 Joelinton scored his first Premier League goal of the season

Newcastle scored twice in the final two minutes to snatch a victory at Crystal Palace in the Premier League on Friday.

Callum Wilson latched on to Joelinton's flick to slide an effort beneath Palace goalkeeper Vicente Guaita and open the scoring in the 88th minute.

And 100 seconds later, Joelinton sealed the victory with his first Premier League goal of the season.

Palace had looked more likely to break the deadlock before being hit on the break twice in quick succession.

The visitors had goalkeeper Karl Darlow to thank for keeping them in the game.

The result moves Newcastle up to 10th in the table, while Palace slip to 13th.

Steve Bruce's Newcastle side had failed to score in their previous two outings but looked far more expansive to start with in south London on Friday.

Joelinton managed four shots in the opening 20 minutes, as many as he had previously had in any game this season, and the best chance of the half fell to him before the break.

Sloppy defending by the hosts allowed the Brazilian to engineer a low effort on goal, but it was easily gathered by Guaita and the Magpies went in at the break having failed to score in the first half of 20 of their past 26 Premier League matches.

Newcastle looked set to make it three games in a row without a goal as they were increasingly pegged back, but the breakthrough did eventually come as Joelinton combined superbly with fellow forward Wilson.

Joelinton then got the goal his hard work deserved moments later, beating Guaita with a left-footed strike for his first top-flight goal this season and third in total for Newcastle.

Attempt saved. Jonjo Shelvey (Newcastle United) right footed shot from outside the box is saved in the bottom left corner.

Jeffrey Schlupp (Crystal Palace) is shown the yellow card for a bad foul.

Callum Wilson (Newcastle United) wins a free kick in the attacking half.

Joelinton (Newcastle United) wins a free kick in the defensive half.

Scott Dann (Crystal Palace) wins a free kick in the defensive half.

Attempt blocked. Cheikhou Kouyaté (Crystal Palace) left footed shot from the left side of the box is blocked. Assisted by Michy Batshuayi.

Jeffrey Schlupp (Crystal Palace) wins a free kick in the defensive half.