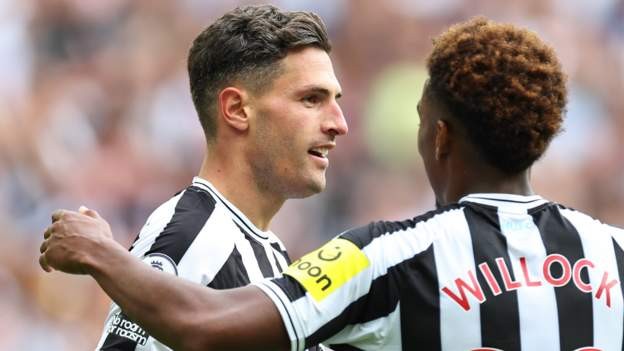 Centre-back Schar collected a loose ball on the edge of the box before sending a blistering effort into the net via the inside of the near post - a goal not dissimilar to the Switzerland international's strike against Burnley in February 2019.

Wilson put the result beyond doubt 12 minutes from time, directing a first-time flick over Dean Henderson and into the far corner from Joelinton's cross.

The pressure on the visitors' goal was relentless from the first minute, but for all Newcastle's territorial dominance they struggled to seriously test Forest goalkeeper Henderson in the first half.

Joelinton went closest to a breakthrough for the home side before half-time, dragging his shot wide from close range following a striding run from midfield.

Steve Cooper's side failed to register a shot on target but were denied an unlikely opener by Schar in the first half, the Magpies defender producing an outstanding block to deny Jesse Lingard inside the Newcastle area.

As was the case back in January, Newcastle's summer recruitment has focused primarily on reinforcing defensive areas, with Sven Botman, Nick Pope and Matt Targett - who enjoyed a successful loan spell at St James' Park last season - joining Eddie Howe's side.

The concern among some Newcastle fans is that they remain thin on the ground at the other end of the pitch - Chris Wood has scored just once from open play for the club, while Wilson has missed 31 of the Magpies' 77 Premier League games through injury since signing from Bournemouth in September 2020.

While Newcastle thoroughly deserved the three points on Saturday, the hosts' somewhat toothless first-half performance highlighted why Howe is so keen to bolster his attacking options before the transfer window closes on 1 September.

Allan Saint-Maximin, Joelinton and Bruno Guimaraes all tried their luck from distance but either shot too close to Henderson or - in Guimaraes' case - failed to hit the target altogether.

The tireless Joe Willock forced Henderson into a low save as Newcastle continued to apply pressure in the second half, before Saint-Maximin was thwarted again by the Forest goalkeeper from close range.

The longer the game went on, the more it seemed the Magpies would require a moment of inspiration to break down Forest - and Schar duly obliged with a goal of the highest quality shortly before the hour mark.

Wilson had a quiet afternoon but, like all good strikers, he took his chance with aplomb when it arrived and has now scored in the opening game in four of the past five Premier League seasons.

While Nottingham Forest failed to register a shot on target, there was much to admire about the visitors' attitude and work-ethic at St James' Park as they frustrated the home team for long spells.

If they can maintain that resilience throughout the campaign, they stand a good chance of keeping their heads above water this term.

Joe Worrall (Nottingham Forest) wins a free kick in the attacking half.

Fabian Schär (Newcastle United) wins a free kick in the defensive half.

Attempt missed. Callum Wilson (Newcastle United) left footed shot from the left side of the six yard box is close, but misses to the left. Assisted by Sean Longstaff.

Attempt missed. Allan Saint-Maximin (Newcastle United) right footed shot from the left side of the box misses to the left. Assisted by Ryan Fraser.

Matt Targett (Newcastle United) wins a free kick in the defensive half.