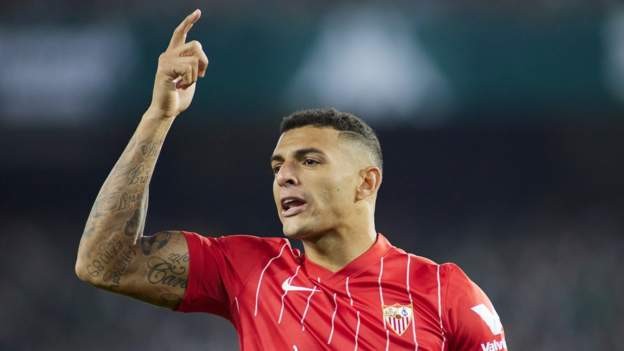 Newcastle are stepping up their pursuit of Sevilla centre-back Diego Carlos and hope they can sign the 28-year-old before Saturday's game at Leeds.

The club has prioritised a central defender after conceding 43 goals in the Premier League this season.

Their focus has now turned to Carlos after Lille said Netherlands Under-21 international Sven Botman was not for sale.

Reports have suggested the Brazilian has handed in a transfer request.

Carlos won the 2020 Europa League with Sevilla and a gold medal at the Tokyo Olympics with Brazil last summer.

He previously played for Nantes in France and Estoril in Portugal after moving from his native country.

Eddie Howe's side sit 19th in the table after conceding a late goal against Watford on Saturday and face Leeds before an international break.

Howe has already signed England full-back Kieran Trippier for £12m and former Burnley striker Chris Wood for £25m in an attempt to avoid relegation following the takeover by the club's new owners in October.