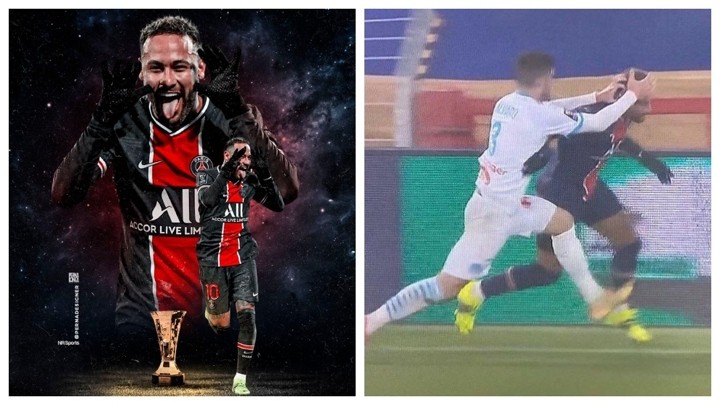 Paris Saint-Germain and Marseille played each other in the Trophee des Champions on Wednesday night in a match that saw Neymar and Alvaro Gonzalez once again come face to face.

The two had a coming together during a Ligue 1 match back in September, with Neymar accusing Alvaro of being racist, and it was clear as soon as the Brazilian came on as a second-half substitute that he was looking to get the better of the Spaniard.

PSG won the match 2-1, with Neymar scoring the second from the penalty spot, yet the back and forth between the 28-year-old and the Marseille centre-back continued on social media.

"King, Alvaro, right?" Neymar tweeted, accompanied by a photo of himself celebrating the goal and an image of the Trophee des Champions.

"My parents always told me to take out the rubbish. Come on, Marseille, always," Alvaro replied, coupled with a photo of himself holding Neymar by the head.

"He forgot how to win trophies," Neymar responded, but that was not the end of it.

Alvaro replied once again, assuring the PSG star that he will always be in Pele's shadow, as he uploaded a photo of the legendary Brazilian player holding three World Cups.

"You will be in the eternal shadow of the king," Alvaro wrote.

Neymar did not remain silent and responded to Alvaro again, pointing out that it is the Spaniard who is really in his shadow and that thanks to him the Marseille player is famous.

Also, Neymar further endeared himself to PSG's supporters by posting a video on Instagram in which he focuses on a Marseille shirt, wags his finger and then removes it to show the PSG shirt underneath with the champions' medal.