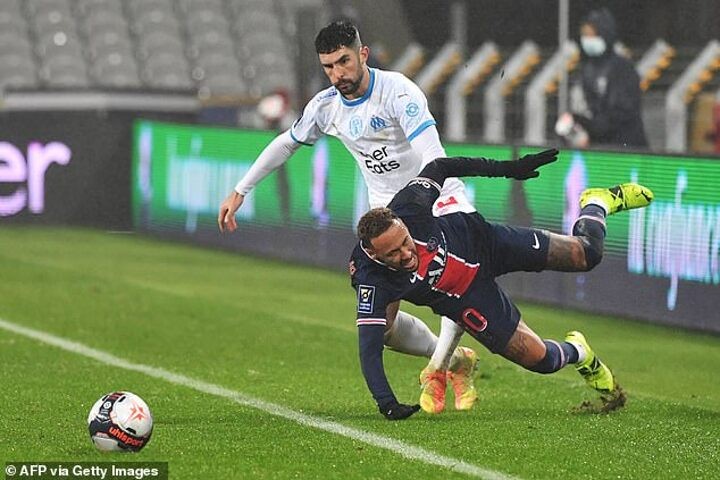 PSG against Marseille is often a fiery fixture and Wednesday's latest instalment provided another chapter in the bitter feud between Neymar and Alvaro Gonzalez.

This time, though, it wasn't left on the pitch and carried on over Twitter in the hours after PSG's 2-1 win in the French Super Cup, handing new manager Mauricio Pochettino his first piece of silverware.

Neymar, who scored PSG's second goal, and Gonzalez have a history that started last September when the Brazil star was sent off for slapping Gonzalez in the back of the head before accusing him of making racist remarks. A French Federation investigation later cleared Gonzalez.

After Wednesday's win, Gonzalez responded to a celebratory tweet of Neymar's captioned 'King, Alvaro born?' by saying: 'My parents always taught me to take out the trash. Go OM (Olympique Marseille) always' alongside a picture of him grabbing Neymar's head while the two jostled for possession in the match.

Neymar, 28, promptly hit back by saying 'And he forgot to win TITLES' with several crying with laughter emojis.

The 31-year-old Marseille defender then hit back again, this time with a taunt comparing Neymar to Brazil's ultimate legend, Pele.

Alongside a picture of Pele holding three World Cups, Gonzalez wrote: 'Eternal shadow of the King.'

Neymar's response said: 'And you mine, I made you famous. You're welcome.'

The duo often came up against each other on the pitch on Wednesday night, with PSG winning thanks to goals from Mauro Icardi and Neymar.

When they came to blows back in September, Neymar refused to apologise for slapping Gonzalez.

'My only regret is not hitting that a**hole in the face,' he said after the match.

Marseille pulled a goal back in Wednesday's encounter thanks to a Dimitri Payet strike in the 89th minute but they were unable to complete their comeback.