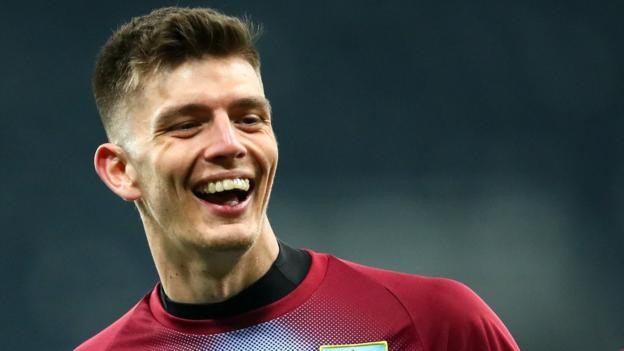 Burnley goalkeeper Nick Pope says he is looking forward to spending "the majority of my career" at the club after signing a new long-term contract.

The 27-year-old made just two appearances last season after dislocating his shoulder and battled with England rivals Tom Heaton and Joe Hart for a starting spot.

That had prompted rumours of a move away from the club.

But Pope said: "I love being where I am and working with the lads every day."

The new deal will keep the former Charlton man with the Clarets until June 2023, with the option of a further 12 months.

"With the contract being for a further four years that will carry me through the majority of my career," he said.

Pope was in England's 2018 World Cup squad after helping Burnley finish seventh in the Premier League but suffered his injury playing in a Europa League tie last July.

That allowed Hart, then Heaton, to hold down the goalkeeper's spot at Turf Moor and Pope had been linked with moves to clubs including Arsenal and Bournemouth.

But Pope says he is fully recovered. "I am in a good place. The shoulder feels good and I'm looking forward to coming back ready for next season," he said.