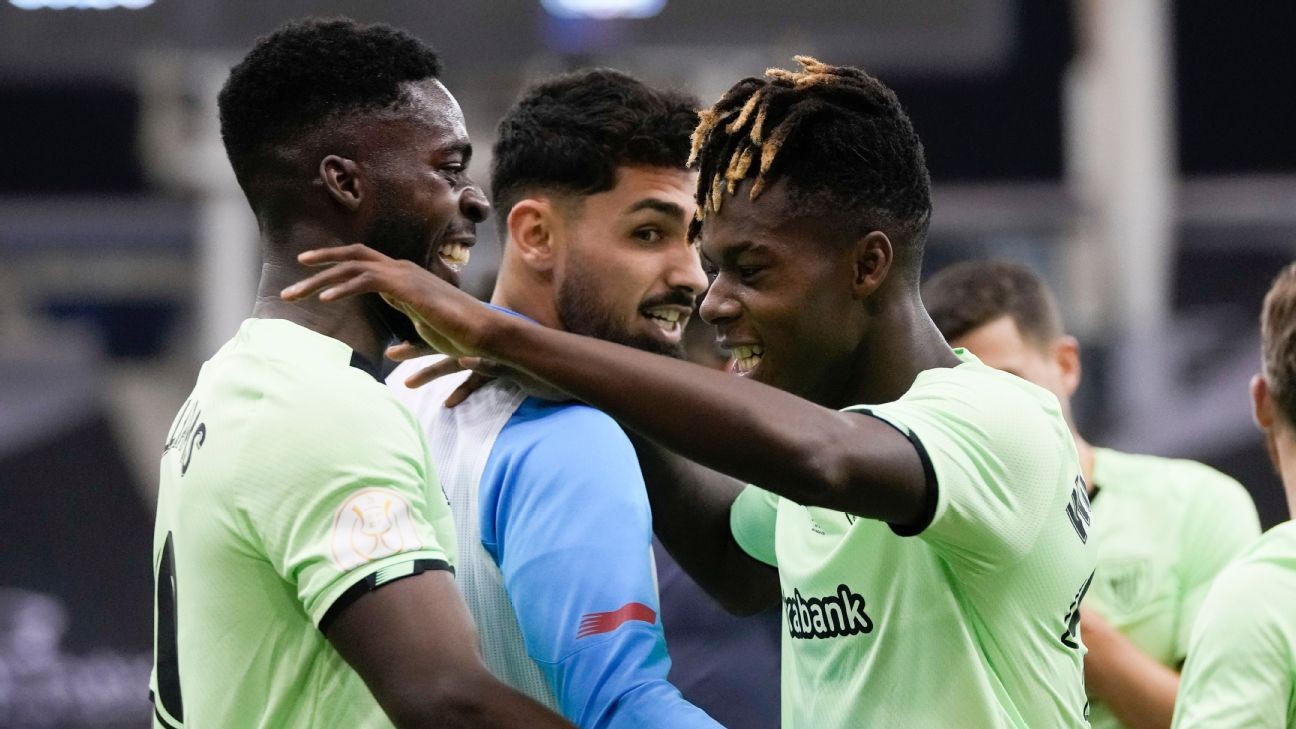 Ama Maria was the happiest woman in the world. That was her little boy down there, scoring the goal that took Athletic Club -- the only team he had ever wanted to play for -- to the Supercopa de Espana final. And that, that was her little boy too, down there with him. Nico Williams' mum was there to see the moment the 19-year-old guided a gorgeous shot past Jan Oblak, tears welling up in her eyes; his brother was there too, right there. Inaki Williams plays with him, as he always has.

What's the point of all these words? What good can they do when the picture paints a million of them, more moving than they could ever hope to be? Just look at it, feel it. Look through it too, to everything that lies beyond, to everything it conveys, everything it means, everything it took to make this possible in the first place. A goal celebration that was so much more, that was everything.

When the ball hit the back of Atletico Madrid net, together Athletic's players embraced Nico, the youngest of them: he's a special kid they have known for years, since he was tiny. One of them held back a little, bursting with pride. He waited because it was right and he wanted it to be just right. Just a little longer; it had been two decades coming, time to hold onto this moment. When the others had finished, standing back a little to watch, proud of them too, Inaki hugged his brother. Hard.

Inaki lifted Nico in the air, feet off the floor and held him there, dangling, still his little kid brother, the one he had raised before and raised now. "If I LOVED YOU ANY MORE, I WOULD DIE," he wrote later on social media. "I LOVE YOU, always together," Nico replied.

When at last it was over, they went to the stands and sought out their mum, their ama. She had held her sister when the goal was scored; now, she held her boys. The "chief", Inaki calls her. "She was very emotional," Nico said. "She told me I deserved it - and to keep working, never to give up." Which sounds like her. The matriarch of whom Inaki said that, when he slacks off or relaxes a bit, gives him a couple of hostias ("whacks") to make him roll up his sleeves. The mother who is never off the phone, leaving voice messages full of advice so long it makes him laugh.

The women who sat him down one day, aged 20, and told him the whole story, where it all began.

"And when I heard it, I was left cold, like: 'wow,'" Inaki recalled. "It's something that marks you, that makes you want to fight even more to try to return to your parents all the sacrifice they made for us. I could not repay that in my entire lifetime."

This was as close as he could have ever wished to come. This was not the first goal Nico Williams has first scored for Athletic, and they're not the first brothers to play professional football together. But there is something especially symbolic about them, something historic about what they had done, something different about their club and their importance there, and about their relationship. Something deeper. And if it was Nico's third goal -- he scored two in the Copa del Rey against Mancha Real last week -- it was the first he'd scored with his brother on the pitch with him.

A few days earlier, in the build up to the Supercopa semifinal against Atlético, Inaki had said he would prefer Nico to score the winning goal than him.

And so it was.

Yeray and Nico Williams each score off of corner kicks to give Atheltic Bilbao a 2-1 lead vs. Atletico Madrid.

"I have dreamed of living this moment alongside my brother for a long time," Nico said afterwards, looking and sounding like the kid he still is. "What I take with me is the hug with my mum and brother. I'm very emotional to be able to share this moment with my brother and I hope there can be many more."

At 19, there should be. But perhaps none quite like this.

When Nico and Inaki's parents came to Spain, they crossed the Sahara by pick-up truck and by foot: their father Felix had problems walking, the soles of his feet burnt. They climbed the fence into Melilla, Spain's north African enclave. Inaki later recalled taking his mother and Nico on holiday to Dubai and her breaking down in tears when she saw the dunes -- the wide, empty swathes of sand reminded her of that crossing.

They had nothing at the time, and some of those who set off with them from Ghana didn't make it. Detained, they escaped deportation by saying that they had escaped the Liberian civil war, and aided by the charity Caritas, the Williams family ended up in Bilbao: Basque Country. Maria was pregnant with Inaki, and that was where he was born. "Destiny," he calls it. Athletic of course are the club with a Basque-only policy; if he'd been born anywhere else, he wouldn't have been able to play for them, and none of this would have happened. A local priest called Inaki gave them clothes and support. He also gave the eldest of Maria's sons a name.

The family had been given social housing in Pamplona in neighbouring Navarra. "There were lots of immigrants, lots of different races. It was a humble, hardworking barrio where people tried to find a way of making ends meet, any way they could," Inaki recalled. They didn't have much. Felix worked any job he could. He was a shepherd for a while and later went to London to seek work: security guard, cleaner, baggage handler, anything he could get. One of the many jobs he did was manning the gates at Stamford Bridge, tearing tickets at Chelsea games.

"When he went, I was 11 or 12, I'm not sure, and things were very bad in Spain. My dad lost his job, my mum went some time without working. My little brother was tiny: 2, 3 years old," Inaki recalled. Felix was gone a decade, the family fortunate if they saw him once a year. Maria worked all the hours she could, taking any job available -- two or three at a time. All of which made Inaki more than a brother for Nico: he was his carer, his guardian, his role model, a father. He would get him up and dressed in the morning, take him to school, bring him home, feed him.

He also played football and, curiously, worked as a referee for a while. There are photos of Inaki as a tiny boy in sparse flat and an Athletic shirt, an old television balanced on an industrial reel: this was his goal and, inspired by his older brother, would become Nico's too.

It exercised a powerful pull upon them and had a huge impact. Their family journey had been long and hard. Their story is deeply personal and unique, but it echoed many others, well beyond the game. It inspired, too. Inaki was only the second black footballer ever to play for Athletic, a man ever more acutely aware of his social significance, his symbolism, his voice. Nico, striving to join him, emulate him, is now the third.

When Inaki made his debut for Athletic, Nico was only 12. "Nico respects me a lot," Inaki told Marca a while ago. "It's as if he was my son: I doted on him, treated him with kid gloves. I try to advise him. Its hard for him to see his brother in the first team and have that pressure to get there. There's a lot of expectation because he has a good attitude and quality but always tell him that it's like birds that can fly away any moment and what he has to do is prove every game that he can keep climbing."

On Thursday night, 4,000 miles from home, Nico Williams climbed into his brother's arms. Up in the stands wearing the Athletic shirt they had always dreamed of wearing, Maria wept as she watched her little boys hug, grown up now, and holding each other as tight as they always had.