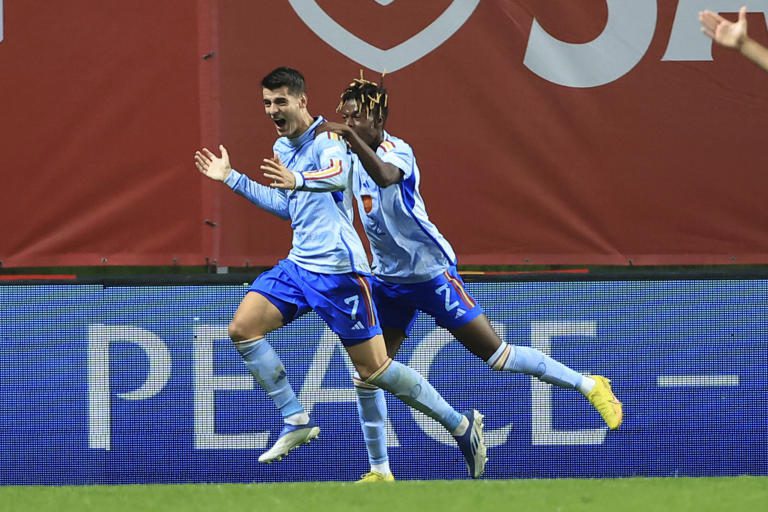 Athletic Club forward Nico Williams could have secured a spot on Spain's World Cup roster with his well-timed header into the area that set up the decisive goal.

The 20-year-old attacker came off the bench to assist Alvaro Morata's 88th-minute goal against Portugal on Tuesday, securing Spain's place in the League of Nations' final phase.

Despite having only made a couple of appearances for the national team, his contribution could have secured him a spot in Qatar.

Despite the fact that he has not started and has not scored goals, his outstanding performances have earned him praise.

He sounds strong to be taken into account with the national coach Luis Enrique, in addition to generating clamour from the fans on social networks.

“Nico has been differential. He has changed the pace of the match with the stride and punch that he has,” said Spanish midfielder Rodri. “The self-confidence has been what we needed. Great turnout and Álvaro was there”.

Morata and his teammates ran towards Williams to celebrate the winning goal in the Portuguese fiefdom. The striker just had to push the ball after Williams anticipated a defender at the far post to head Dani Carvajal's measured cross.

"Morata has told me that the goal is mine," said Williams. “I have seen him there alone and I passed it to him.”

Spain had no alternative but to win to win the group.

"Nico in his second game with the national team has been key," said Morata.

Williams was also a shock coming off the bench in the half hour he played in his debut against Switzerland at the weekend, a game that La Roja lost 2-1 at home.

"It's an honor for me to be here," Williams said. “Hopefully I can be in the World Cup. That is the decision of the master”.

After citing Williams for the first time, Luis Enrique praised him as a "pure winger" for his speed and dribbling ability.

“He has told me to be brave to face it and to be myself,” Williams said of the instructions he received Tuesday when he came on for Ferran Torres in the 73rd minute.

The other attackers summoned by Luis Enrique, all fighting to be taken into account in the World Cup list, were Pablo Sarabia, Marco Asensio, Borja Iglesias and Yeremy Pino. The coach dispensed with Ansu Fati, 19, because he is not getting many minutes at Barcelona. But Fati has several weeks ahead of him to fight for a position.

Williams could end up accompanying his older brother in Qatar. Iñaki, who also plays for Athletic Bilbao, will represent Ghana in the tournament.

The Williams brothers were born in Spain to parents from Ghana who moved to Spain decades ago. To stay in the country, an employee of the aid agency Caritas advised them to say that they were fleeing the civil war in Liberia.

They are one of the few black players who have played with Athletic, the historic Basque Country club that only signs footballers from the city or who emerged from the region's team academies.

Athletic would be managing to increase the termination clause of Nico Williams, currently 50 million euros (47.8 million dollars) in a contract that ends in 2024

They know that in a few months, depending on what happens in Qatar, their market value will exceed that time.