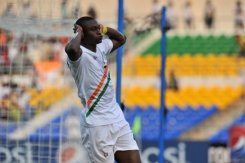 Niger skipper Moussa Maazou has vowed to give their all when they clash with Ghana in the decisive Group B match at the 2013 Africa Cup of Nations on Monday.

Second favourites behind Ivory Coast to win the tournament, the Black Stars of Ghana top with four points after an opening-day stumble against DR Congo.

Ghana let slip a two-goal lead against the Congolese which allowed the two time champions to hold the Black Stars to a 2-2 draw.

They subsequently dominated Mali in their second group game which they won 1-0 but the Black Stars must win their final game against Niger.

Niger also showed their character by holding DR Congo to a 1-1 draw which gives them the hope that they can also reach the quarter finals by beating the Black Stars.

While admitting that the match against Ghana won't be easy, Maazou insists they will be no pushovers in ther game against the Black Stars.

"It won't be an easy match for us, but we will try our best," vowed Maazou, whose team have watched videos of the two games involving Ghana.

Midfielder Issiakou Koudize is the only concern for Niger as he has a knee injury.

But he could still feature in the game as their German coach Gernot Rohr says the 22-year-old defensive midfielder will face a late fitness test.