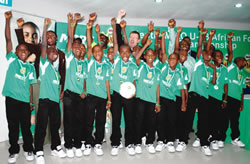 Nigeriaâ€™s St. Stephenâ€™s Primary School have pledged to win the Nestle Milo U-13 African Football Championship being hosted in Ghana.

The west African powerhouse and four others; South Africa, Kenya, Sierra Leone and Liberia join hosts Ghana in the second edition of the event which commences from April 11 to 13.

Asegun Comprehensive High School from the Nigerian state of Ibadan, emerged winners of the inaugural Nestle Milo U-13 African Football Championship in South Africa two years ago and St. Stephenâ€™s captain, Deji Oshodi, says his team is hoping to bring back the trophy to Nigeria for the second consecutive time.

â€œWe are going to Ghana to bring the cup back to Nigeria by Godâ€™s grace,â€ Oshodi, a central defender, said at the teamâ€™s presentation to the Nestle Nigeria Plc Managing Director, Martin Woolnough, in Lagos on Thursday.

â€œOur team is preparing hard, we are praying together and we discuss how we will bring the cup back to Nigeria.â€

Oshodi is also hoping to play an inspirational role in the squadâ€™s success just like his role model, Nigeria captain, Joseph Yobo.

â€œYobo is my model because he is powerful and very difficult to beat. I hope to combine these qualities to help our team emerge champions.â€

Woolnough in his response said the company would continue to help in the development of the youth and urged the countryâ€™s representatives to give their best in Accra.

He said, â€œWe recognise the major role sports play in education and Milo as organisers will continue to organise well and the spirit of the game would be in good faith.

â€œLast time, our team (Asegun Comprehensive High School) was the smallest in size but biggest in spirit and they won. Winning is part of life and we donâ€™t need to win all the time. We have to be gracious in defeat just like in winning.â€

Category Business Manager, Beverages, Nestle, Femi Akintola, added that pupils of St. Stephenâ€™s Primary School would be provided with N100, 000 each as bursary scholarship if they emerged winners while they would get N50, 000 and N25, 000 each if they emerged second or third best team respectively at the championship.