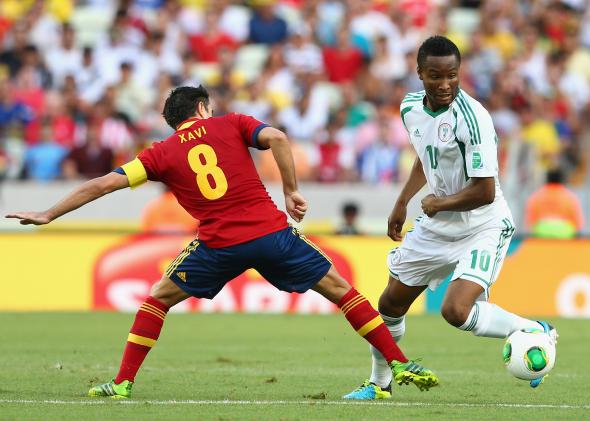 John Obi Mikel shows his skills in a 2013 Confederations Cup match against Spain.

There have been 15Â international FIFA Youth Championships. Nigeria has won four of them, including the 2007 and 2013 titles, and finished second another three times.

The Nigerians are also the reigning champions of Africa, have one of the best World Cup pedigrees outside of Europe or South America, and a roster that features a handful of household names. Why, then, isnâ€™t Nigeria a serious contender in Brazil?

The answer is that, historically, Nigerian football has been synonymous with self-sabotage and dysfunction. â€œTraversing the minefield of Nigerian football is no task for the faint-hearted,â€Â writes Osasu Obayiuwana, a BBC journalist and expert on African football. â€œPulling defeat and sorrow out of the jaws of victory â€¦ is a well-established Nigerian tradition.â€

Itâ€™s tough to know where to start. How about the fact that current coach Stephen Keshi won the 2013 Africa Cup of NationsÂ but still didnâ€™t get paid? Thereâ€™s also the recent match-fixing in Nigeriaâ€™s domestic league that led to theÂ farcical scores of 79â€“0 and 67â€“0. And consider that the secretary-general of Nigeriaâ€™s football federation once said it was OK for refs to take bribes,Â so long as they donâ€™t let the money influence their decisions.

These scandals are nothing new for a country that has become a symbol of the ills plaguing African soccer. The line between corrupt soccer and corrupt politics is almost invisible. Nigeria is, after all, the country where there was a Senate investigation into the countryâ€™s poor performance at the 2008 Africa Cup of Nations, and the nationâ€™s executive branch onceÂ took over the national team.

Amidst all this, itâ€™s easy to forget that Nigeria has been a force on the field,performing admirably at last yearâ€™s Confederations CupÂ and in all of thoseÂ under-17 and under-16 world championships. But in its four previous World Cup appearances, Nigeria has never gotten past the round of 16, and it hasnâ€™t even gotten that far since 1998.

Could Nigeria be a victim of its own youth success? Tactical expertÂ Michael Cox has writtenÂ about how European teams frequently sign promising young African players and then change their style of play, asking them to be less creative and more physical. The result is that most young African players are often shoehorned into â€œthe MakÃ©lÃ©lÃ© roleâ€â€” named after famed French international player Claude MakÃ©lÃ©lÃ©, who almost never crossed the halfway lineâ€”transforming into defensive midfield enforcers rather than attackers.

John Obi Mikel, Nigeriaâ€™s captain, is perhaps the best example of this phenomenon.

â€œ[He was] a young, strapping lad in the No. 10 jersey, languid in style but absolutely majestic in his control of a football game ... his game was about economy of movement, finding the right pass at the right time to unlock a stubborn defense,â€ remembers Colin Udoh, a prominent Nigerian journalist.

But when Mikel moved to Chelsea, he was forced to play a very conservative role, freeing up players like Frank Lampard to dictate play. Mikel returned to Nigeria a worse player.

â€œ[He] lost the creativity that catapulted him onto the world stage,â€ complained Samson Siasia, a Nigerian coach. â€œChelsea destroyed the player Mikel once was.â€

That seems to be the trend for a number of players in this Nigeria team. Today, the squad plays well-organized but not particularly creative football.

Still, Nigeria is in an easy-ish groupâ€”though beating Bosnia to get second place is a tough askâ€”and could make a run. But most likely they wonâ€™t, and the Super Eagles will fly home to their usual tune of interference, corruption, and infighting.

Match Schedule:Â Nigeria is inÂ Group F, and it opens its World Cup campaign againstÂ IranÂ on June 16â€”a must-win if the Super Eagles are to advance. Nigeria then lines up against first-timersÂ Bosnia and HerzegovinaÂ on June 21, in what is a likely battle for second place. Nigeria will be hopingÂ ArgentinaÂ will be through to the second round by the time those two play on June 25.

How They Line Up:Â A cross between 4-2-3-1 and 4-3-3. Nigeria has varied its approaches in the past several years, sometimes pressing and sometimes siting back.Â

Key Players:Â Fenerbahceâ€™sÂ Emmanuel EmenikeÂ will offer pace and power up front, while Chievoâ€™sÂ Victor ObinnaÂ also has a good record for the national team. In midfield,Â Victor MosesÂ (Liverpool, on loan from Chelsea) will add width, while Chelseaâ€™s veteranÂ John Obi MikelÂ will hold down the center, playing simple passes in a much more conservative role than he used to play for this team.

The defense is young, but has a remarkably large number of caps. Middlesbroughâ€™sKenneth Omeruo, for example, is only 20 but has played for the national team almost 20 times. Champions League fans will recognize Celticâ€™sÂ Efe Ambrose, who will play alongside Monacoâ€™sÂ Elderson.Â And in net, it's Lilleâ€™sÂ Vincent Enyeamaâ€”a decent shot stopper who is also phenomenalÂ atÂ takingÂ penalties. He could be a double hero in a shootout.

Rising Star:Â CSKA Moscowâ€™sÂ Ahmed Musa, who has been a revelation in the past couple years. Heâ€™s been phenomenal for his club, and with Europeâ€™s top teams already hunting his signature, itâ€™s tough to say heâ€™s still a rising star. But, amazingly, heâ€™s only 21. This will be his first World Cup of several.