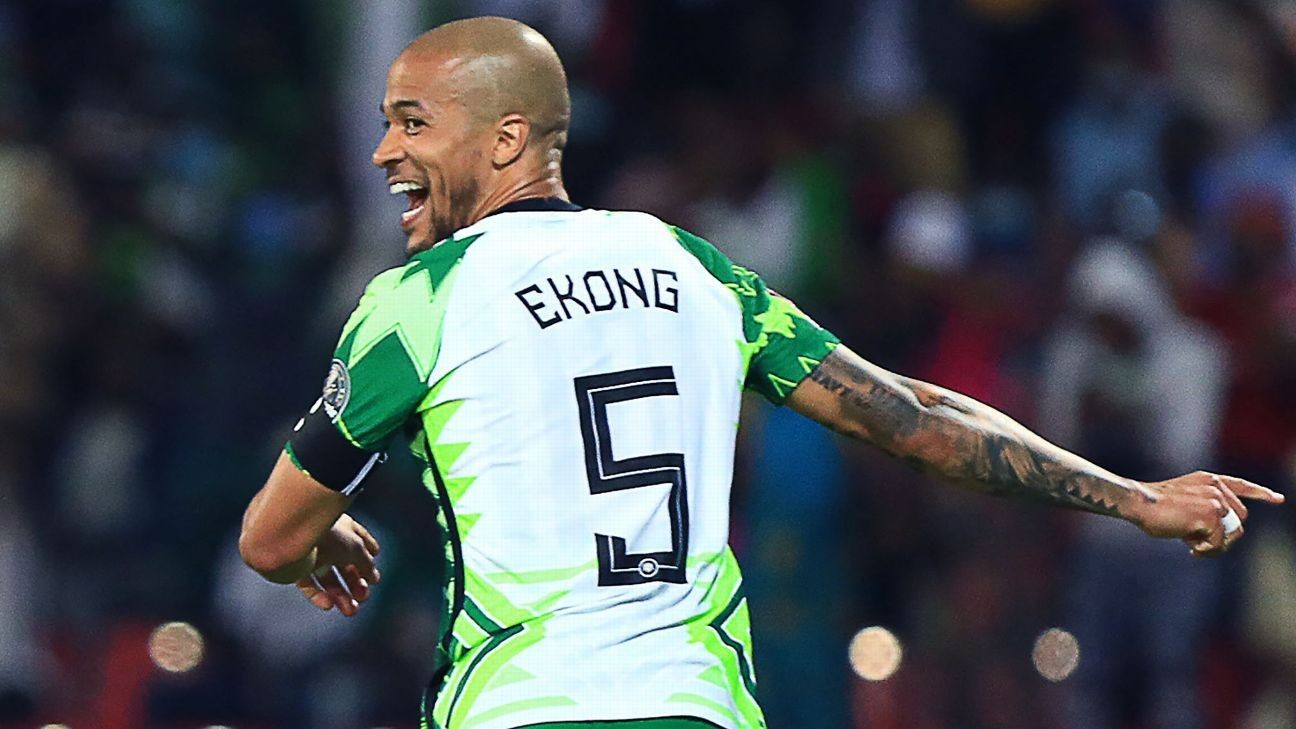 As William Troost-Ekong wheeled away after scoring the goal that sealed Nigeria's 2-0 victory over Guinea-Bissau in the Super Eagles' final Africa Cup of Nations group game, it was easy to imagine the wave of emotions pouring over him in that moment. After seeing that goal, and the three performances preceding it, Watford fans can also be forgiven for wondering if they are seeing the same player they have been watching week after week in the Premier League.

The goal, and the Man of the Match award, was just reward for the focus and dedication the defender had re-committed to his craft after some poor performances, and virulent criticism from Watford fans. Although for a brief moment -- that would have seemed like an eternity to the Nigeria man -- the goal was in danger of being scratched for offside as VAR reviewed what appeared to be Peter Olayinka's involvement in the build-up.

The Slavia Prague forward looked to have been marginally offside when Moses Simon finished weaving an intricate piece of footwork with a thunderous shot that rebounded off the crossbar for Troost-Ekong to stab in. Eventually, the goal was given, much to the delight of the Troost-Ekong and Simon, whose attempt to end the careers of half of the Guinea-Bissau defence with his trickery deserved to be finished with a goal and replayed for eternity.

- Africa Cup of Nations bracket and fixtures schedule
- AFCON kit rankings: Who has the best jersey?
- Don't have ESPN? Get instant access

But back to Ekong. The defender has endured a tough few months, with the past two being particularly bad. His form, especially at club level, suffered a dip that coincided with Watford's atrocious run of form under Claudio Ranieri, and, to some extent, with Nigeria's final disappointments under former coach Gernot Rohr.

In October, Troost-Ekong was involved in a communication breakdown with centre-back partner Leon Balogun that led to Central African Republic scoring a shock, late winner against the Super Eagles in World Cup qualifying. He was also blamed for the goal conceded in the home fixture against Cape Verde during the same series. While the defender cannot be said to be responsible, those two results proved key in Rohr's dismissal.

At club level, Watford are 18th in the Premier League, in a relegation fight, and the Nigerian has taken flak for his errors as the Hornets lost six games in succession after their remarkable 4-1 victory against Manchester United.

Among his more notable gaffes was his mistake against Leicester City in November, when he ducked under a long ball thinking goalkeeper Daniel Bachmann would claim it easily -- only for James Maddison to score the opening goal in a 4-2 loss.

Then came Watford's loss to Brentford, during which Troost-Ekong's reckless challenge on Saman Ghoddos gifted the Bees the winning goal from the penalty spot deep into stoppage time. The defender had also been culpable in Brentford's equaliser, allowing Pontus Jansson to nip in between him and a teammate to head the ball into the net from close range.

The performances led to intense criticism from fans, some of which was so hateful as to be unprintable. Stung, the defender deactivated his social media accounts as he sought to focus on his work -- and that dedication is paying off handsomely.

With Balogun injured, the responsibility for leading Nigeria's defence has fallen to Ekong, and, while there were doubters, he has been back to his best in Cameroon. Indeed, Troost-Ekong has been outstanding, leading Nigeria in all three of their AFCON group games, with substantive captain Ahmed Musa given only a substitute's role. He has led from the back with strength, reading the play superbly, making impeccable challenges, and directing traffic flawlessly, as Nigeria conceded just once in their three games -- including against Mohammed Salah's Egypt.

"I'm very happy that I managed to contribute as much as I can so far," Troost-Ekong told ESPN. "That's the beauty about football. You can give the best answers on a pitch.

"In November, December, I was criticised, and that's normal. That's your job. I'm not perfect, and of course you make mistakes, but I think the biggest thing is that you want to improve all the time."

Troost-Ekong is grateful to have had Ranieri's backing, as the Italian continued to pick him to start games. Rohr and Augustine Eguavoen, who is managing Nigeria in Cameroon, have done likewise.

The defender said: "I'm very happy that the coach and the coaching crew gave me the confidence again to play, and I'm trying to pay them back for that."

Nigeria's William Troost-Ekong has rediscovered his best form at the Africa Cup of Nations. DANIEL BELOUMOU OLOMO/AFP via Getty Images

Nigeria face Tunisia in the round of 16, and the Super Eagles need Troost-Ekong to be the presence they are seeing in Cameroon rather than that they saw in October and November.

Troost-Ekong described Nigeria's success in the group stage as "a team effort." He said: "All the boys up front are working very hard to stop the balls from getting to us.

"The key thing is we really try [to] defend together and also attack together ... all of the defenders are trying to contribute as well with some goals here and there, and all the attackers and midfielders are working very hard to give us as little as possible to do."

Unlike at the beginning of the tournament, when Nigeria played Egypt as underdogs, the Super Eagles now are favorites to defeat Tunisia and advance to the quarterfinals.

Tunisia have seen their campaign compromised after the squad was ravaged by COVID-19 infections, and they qualified for the round of 16 as one of the best third-placed teams in the groups, but interim Nigeria coach Eguavoen is staying grounded.

"I expect a very tough game against the Tunisians," Eguavoen told ESPN. "Our group will not be lulled into any sense of superiority over any team here until we do the business on the field. Tunisia is a big name in African football, and we must acknowledge that, despite the manner in which they reached this stage."

Eguavoen was also in charge of the Nigeria team when the Super Eagles last played Tunisia at the 2006 Africa Cup of Nations in Egypt. Nigeria defeated the then defending champions after a penalty shootout, and Eguavoen remembers it as "a huge, huge game, and a memorable one for me".

"The match ended 1-1 in regulation and extra-time and we had to go into penalties," Eguavoen said. "We lost two of our first three kicks, or something like that, and then bounced back when our goalkeeper [Vincent Enyeama] stopped two of their kicks. It was a sweet victory.

"We have watched some of their games, and from what we know of them in the distant past and in lucid memory they are never a team to take for granted."

Eguavoen will be depending on Troost-Ekong to stand firm. Watford fans will also be watching with keen interest, hoping the defender who returns to the Hornets for their relegation battle is the hard-as-nails, commanding and error-free player who has starred in the Africa Cup of Nations rather than the struggling player who departed England for Cameroon.