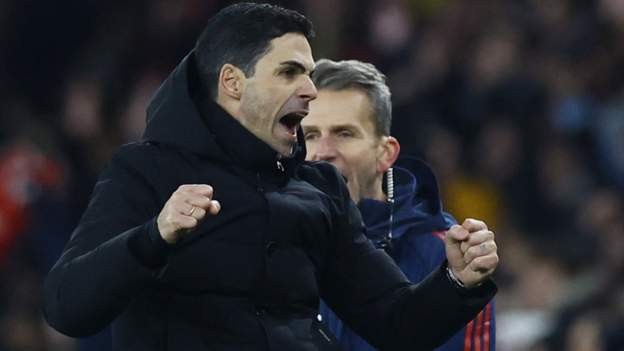 The game looked like it was heading for a 2-2 draw after Lisandro Martinez equalised for Erik ten Hag's side.

But Nketiah - who also scored in the first half - netted in the 90th minute to keep the Gunners five points clear at the top of the Premier League.

With the pressure on Arsenal following Manchester City's 3-0 victory over Wolverhampton Wanderers earlier on Sunday, Nketiah's winning goal from close range was met by rapturous scenes inside the Emirates Stadium.

Arteta added: "It was a beautiful moment at the end and we get going with our people behind us. It was beautiful."

They had to wait for confirmation they had secured all three points, however, following a video assistant referee check to determine whether Nketiah was onside.

Arteta admitted even he was not sure whether the crucial goal would be given.

"[The officials] were looking at something we hadn't seen and we very relieved," said the Spanish boss. "We got to celebrate twice."

Marcus Rashford gave the visitors the lead on 17 minutes with a sensational strike before Nketiah drew the home side level shortly after.

Bukayo Saka then put Arsenal ahead early in the second half, and while it seemed the points would be shared following Martinez's headed goal, Arteta felt confident his team had the mentality to succeed.

"They do surprise me with how they react," he said. "We encourage them to play free-flowing football and there is energy in the team and good things happen.

"To do it repeatedly against big teams, the way we played today, gives me a lot of positivity for the future.

"It is so tight now in the league, there are such small margins. Winning, losing or drawing, you have to be be conscious of that.

"If we can capitalise on the energy, it will be positive."

As well as a five-point lead, Arsenal have a game in hand over Pep Guardiola's City, and have reached 50 points after playing 19 matches of the season - their best start to a top-flight campaign.

The two sides will do battle in the FA Cup next, when they meet in the fourth round on Friday.

Manchester United came to north London on the back of a 1-1 draw with Crystal Palace, a result that denied them their 10th successive victory.

Rashford's opener - his ninth goal in all competitions since the World Cup - was the dream start Ten Hag would have hoped for, but the United boss was disappointed with his team's lack of concentration.

"All the goals we conceded today are mistakes - it can't happen," the Dutchman told Sky Sports.

"Even last week, we were so hard to beat in such situations. Today we were not. All three goals, we could have avoided."

Ten Hag was without influential midfielder Casemiro for the game with Arsenal, as the Brazilian served a one-match suspension for picking up a fifth yellow card in midweek.

While he conceded that the Gunners are "good on the ball", Ten Hag said his side are a "good defending team" and should have done better against the league leaders.

"There were not a lot of open chances," he added. "We made mistakes which we cannot make. This game was decided by small details but also the decision making.

"That is hard to accept and we have to learn from it. I want to win. It is not good enough. We want to be the number one, but not if we make mistakes. That is clear and what I told them."

United are in fourth place, level on 39 points with third-placed Newcastle, and face Nottingham Forest away in the first leg of the Carabao Cup on Wednesday.