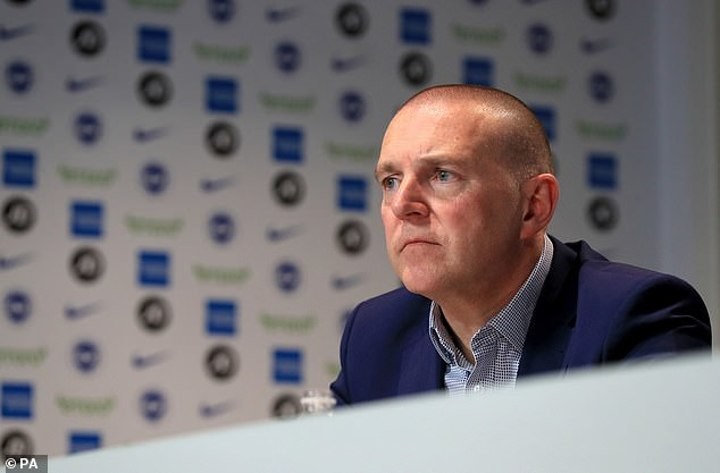 Premier League clubs who have been fighting to restart the season with normal home and away games rather than neutral venues could be in for a rude awakening.

Brighton, Watford and Aston Villa's bosses have stated their opposition to neutral venues, because they are desperate to make the most of home advantage as they fight survival.

However, a new study has revealed that such an advantage does not exist when football is played without fans — with a major reason shown to be that referees are no longer influenced by the home crowd.

The study, which analysed all 191 competitive matches played behind closed doors across Europe since the Second World War, showed that home teams won just 36 per cent of matches compared with 46 per cent in front of their supporters.

Away teams won 26 per cent of the time with fans but saw their win-rate soar to 34 per cent when matches were behind closed doors. The difference was still there when the relative strengths of the teams was factored in.

Those findings appear to have been backed up by the return of the Bundesliga.

Only one home team was victorious in the first round of fixtures and only Bayern Munich won at home in Saturday's five games.

The study analysed the fixtures behind closed doors played across the French and Italian top flights, the Champions League and Europa League as well as one in La Liga.

It also showed that home teams score 0.21 goals fewer in games behind closed doors. Penalty kicks are also more likely to be missed by the home team and scored by the away team when the stadium is empty.

'What we found was that home advantage essentially disappears,' Dr James Reade, associate professor at University of Reading and co-author of the study told The Mail on Sunday. 'You have got this rambling by the teams at the bottom that they want to maintain that home advantage. It doesn't appear that there will be any home advantage.

'You might have thought if you were a team with five games left at home and four away, you might argue you want to play them at home. But, actually, what this suggests is that if there are no fans, it does not really matter.'

Reade's study revealed that away teams are treated less harshly by officials with no fans in stadiums, with referees showing them on average half a yellow card less. 'That points to referees no longer being influenced on their split-second decisions,' he said.

Former Premier League referee and Mail on Sunday expert Chris Foy said: 'From my own experience, once the whistle goes you are so focused on the match, you don't really notice the crowd.'

Aston Villa have six games left at home — one more than the rest of the bottom six — and have the best home record of any of that group.

Villa chief Christian Purslow recently told talkSPORT: 'I'm against neutral venues. We're a club that prides itself on home form. Two-thirds of our wins this season have come at home. We've got six home games left to play and I think any Villa fan would agree that giving up that advantage is a massive decision.'

Brighton chief executive Paul Barber said: 'The disadvantages of us not playing the league's top teams in our home stadium, even with 27,000 Albion fans very unlikely to be present at the Amex, are very obvious.'