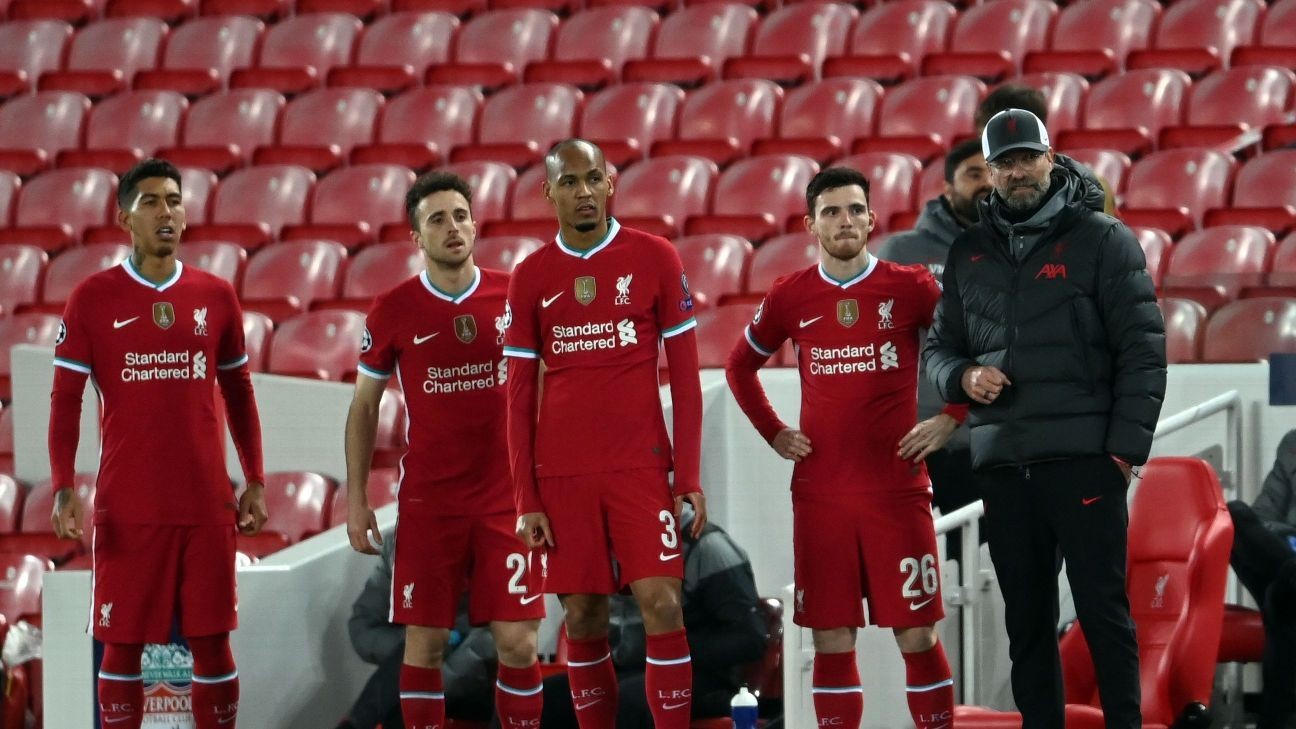 It's not often you can lose at home in the Champions League and shrug off the consequences, but Liverpool know that their 2-0 loss against Atalanta at Anfield is not a reason to start looking for the panic button.

Even if the Premier League champions lose again next week when Ajax come to town, a draw in their final Group D game against FC Midtjylland -- who have lost all four group games so far -- will be enough to take Jurgen Klopp's team through to the Round of 16. But while there will be no sleepless nights in Liverpool after this defeat -- remarkably, the heaviest home defeat in Klopp's five-year reign as Reds manager -- it will serve as a warning for what could happen further down the track in this competition.

Quite simply, you can make changes and get away with it in the Premier League, but against top-quality opponents in Europe, there is always the danger that they will punish even the slightest weakness ---especially self-inflicted shortcomings.

"It was not a good game," Klopp said. "Both teams didn't create a lot until they scored the goals, but it was a deserved defeat in a difficult game.

"We had moments but not real chances. It could happen to other teams."

Klopp knew all the permutations before he selected a much-changed starting XI against an Atalanta side who were beaten 5-0 by Liverpool in Bergamo earlier this month. Having won their first three games in the group, the 2019 Champions League winners had given themselves a cushion at the top of their section and had, therefore, earned the right to field a weakened team.

Salah, Matip both 5/10 as rotated Liverpool suffer upset vs. AtalantaChampions League: How teams can qualify for round of 16Diego Maradona will be remembered as one of soccer's greatest, the sport's ultimate flawed genius

With Liverpool facing an away game at Brighton in the Premier League at 12:30 GMT (7:30 ET) on Saturday, the fatigue factor was the primary reason behind Klopp's selection.

Injuries to key players such as Virgil van Dijk, Joe Gomez, Trent Alexander-Arnold and Jordan Henderson have already taken their toll on Klopp's squad and the manager has been vocal with his frustrations about the demands that the fixture scheduling is placing on his squad. That meant Rhys Williams and Neco Williams, two 19-year-olds, started at the back, with another, Curtis Jones, in midfield.

Greek left-back Konstantinos Tsimikas, 24, was handed only his third start of the season in all competitions and Divock Origi was also given a rare opportunity to show that he is more than a reliable substitute. But although the familiar figures of Alisson, James Milner, Joel Matip, Sadio Mane and Mohamed Salah were present from the start, the changes to the team were enough to give Atalanta the chance to claim the victory that has revived their hopes of qualifying for the knockout stages.

Liverpool learned on Wednesday that an off day in the Champions League will almost always be punished. Photo by Laurence Griffiths/PA Images via Getty Images

The Italians showed on their run to last season's quarterfinals that they are a team capable of beating more celebrated opponents and Klopp's selection was a gift to coach Gian Piero Gasperini. Atalanta grasped it with open arms, with second-half goals from Josip Ilicic and Robin Gosens earning a win with a scoreline that did not flatter the visitors. Atalanta could have scored more against a Liverpool side that failed to create a single effort on target.

Atalanta's goals were both down to poor defending by Liverpool's makeshift defence and their inability to stop, or clear crosses from the impressive Papu Gomez. On this occasion, the goals and the defeat are unlikely to hurt Liverpool, unless they lose their final two games in the group.

But with Van Dijk and Gomez likely to be missing for the majority of this season, Liverpool will have to find a way to tighten up defensively on European nights, especially with their home form beginning to slip -- they have now won just one of their last four UCL games at Anfield. If they reach the latter stages, the potency of the attacking players they will face ensures that Klopp's team must be more convincing at the back.

Alexander-Arnold will be available soon and both Fabinho and Milner have shown that they can successfully slot into the back four and give Liverpool the solidity that they lacked against Atalanta. But ultimately, the problems at the back on Wednesday were caused by Klopp's selection. It was too inexperienced at this level.

The justification for the changes was understandable, with the trip to Brighton a more testing fixture due to Liverpool being in a comfortable position at the top of Group D. But Liverpool can't risk youngsters and fringe players in the knockout stages. If injuries mean they have to play, then so be it, but the lessons of the Atalanta defeat should be taken seriously.

And when it comes to the sharp end of the competition, winning without Van Dijk will not be easy.

Klopp will hope that, by the time that stage arrives, he does not feel the need to juggle priorities in different competitions because as Wednesday showed, you simply can't afford to take chances in the Champions League.