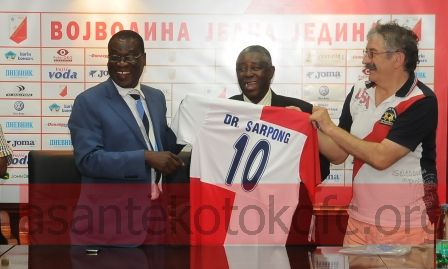 Giants Asante Kotoko say they are yet to receive offers from clubs for their star players which impressed on a pre-season tour to Serbia.

Over 20 agents and scouts monitored the team in the six matches played in the Eastern European country.

"I haven't had any written offer yet for Toure, if it comes I will review it," Asante Kotoko Executive director Dr K.K Sarpong told GHANAsoccernet.com.

"But until I get a written offer and we go through all negotiations, I won't make the conclusion I have sold any player."

Kotoko are cash-crapped and need money to lubricate their wheels for a 21st league title next season.

"This issue of sale of players is being over bloated, it is being exaggerated. We will sell players if we have very good offers," Sarpong added.

"So far there is no concrete offer but if they come they will be considered and reviewed but I have said time and again that any player being sold we have a substitute."

The club are counting on the tour to help fortify the squad for the new season which is scheduled to begin on 9 October.

"Virtually all the players that played excelled and I quiet remember telling some radio stations in Ghana that if the boys had played this way in Ghana, we would have probably won the league," he said.

"Perhaps because they thought they were going to get contracts that was why they put in such wonderful performance but they played very well and a lot of interests have been expressed.