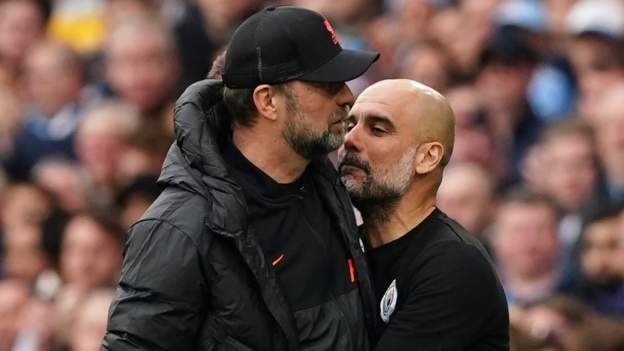 Jurgen Klopp says there is no pressure on Liverpool as they put their historic quadruple pursuit on the line on the final day of the Premier League season.

The Reds, who have won both domestic cups and are in the Champions League final, have cut a 14-point deficit to leaders Manchester City to one point before Sunday's finale.

While City host an Aston Villa side managed by former Reds captain Steven Gerrard, Klopp's team face Wolves. "For us, it is pretty positive, it is so special," said Reds boss Klopp.

After the Wolves game at Anfield, the Reds will prepare to face Real Madrid in the Champions League final in Paris on 28 May.

But Klopp said there was no pressure on his players this weekend because Pep Guardiola's City side have been frontrunners for so long during 2021-22.

"I cannot talk about pressure for the other team but it's like this for us: there is no pressure," said the German.

"If you have something to lose it feels different - but we don't have that.

"We know that we have to win the football game but we've had that now for a while.

"We have been in situations like this before and we know it is not easy but most of the time we have dealt with it OK.

"I have no reason to think why City wouldn't but the situation is different. Ours is full throttle - give it a try and let's see what the outcome is."