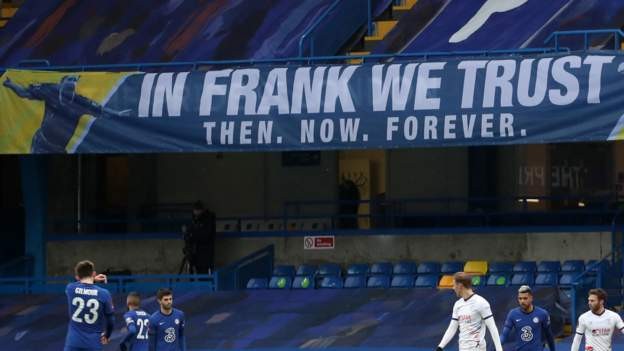 "In Frank we trust," read a banner at Stamford Bridge during Sunday's FA Cup win over Luton

When Frank Lampard was appointed Chelsea manager in July 2019, many wondered whether this was evidence of a new and previously undetected sentimental streak in the club's ruthless owner Roman Abramovich.

Lampard, who succeeded the unloved Maurizio Sarri, was a departure from Abramovich's traditional template of hiring experienced, or at least very successful, managers.

This was the appointment of someone with raw potential who just happened to be a Chelsea legend as the club's all-time record goalscorer, with a tally of 211, accompanied by 11 major trophies.

It qualified as a gamble, almost a shot in the dark, by Abramovich's usual strategy. It was certainly a step into the unknown by Chelsea's standards.

Lampard sacked after 18 months in chargeFollow reaction to Lampard's sacking

Lampard had been a manager for one season at Derby County, missing out in the Championship play-offs - or as those questioning his credentials for such a huge job pointed out, he had taken the Rams from sixth on arrival to sixth at departure.

Any notions that Abramovich had suddenly got romantic or sentimental, or would offer Lampard mates' rates based on past history after a poor run of five defeats in eight Premier League games, were swept away in brutal fashion when he was unceremoniously sacked on Monday morning.

Abramovich does not do romance or sentiment. He does reality of a very cold kind and while he would have wanted the perfect ending for a man he respects greatly, Lampard was operating within the same boundaries as all of the Russian's previous managers.

Chelsea's statement, while outlining Lampard's iconic status and even containing rare comment from Abramovich himself, did not mince its words about why the decision had been taken, saying the club had been left "in mid-table without any path to sustained improvement".

And with that, Lampard was gone. Sacked by lunchtime on Monday.

The initial reaction was that Lampard's dismissal was ruthless even by Abramovich standards, coming after he manoeuvred Chelsea into fourth place and the Champions League last season utilising youngsters such as Mason Mount and Tammy Abraham as the club operated under a restrictive transfer embargo.

He was also working without Chelsea's great talisman and biggest talent Eden Hazard after his sale to Real Madrid.

And there will be widespread sympathy among Chelsea's supporters for a beloved figure, although their sadness will be framed within the fact so many of Abramovich's sackings have simply been the signal for a new manager bringing renewed successes.

Lampard's terms of engagement with Chelsea and Abramovich changed significantly in the summer once that embargo ended and he was handed more than £200m to spend in the transfer market on the back of that first promising season.

He knew the rules. He had lived them long enough as a player and seen enough Chelsea managers go through the revolving door at Stamford Bridge - he played under nine - to know the score.

Abramovich always backs managers but the price on that ticket must be success. If you do not improve, do not at least have Chelsea near the Champions League places, you will be sacked. A glorious past with the club will count for nothing.

These are the rules that claimed Lampard.

The Blues' squad looked drained of all confidence and they were moving further away from the clubs Abramovich expected Lampard to be challenging after his spending spree.

And yet it all went wrong so quickly.

Chelsea visited Everton on 12 December on a 17-match unbeaten run and even defeat at Goodison Park still left them third in the Premier League.

Since then, however, they have performed abysmally, with the performance in the 2-0 loss at Leicester City on 19 January - in what turned out to be Lampard's final league game - as poor as anything they had produced.

Chelsea are ninth as Lampard leaves. Yes, only five points off the Champions League places but with Abramovich clearly believing things will not improve, he has acted now to at least salvage a top-four place this season.

And at the heart of it all has been the lack of return on that heavy summer investment, not simply measured in league placing but also by the poor performances of those big money buys, as well as an apparent decline in belief in the rest of Lampard's squad.

The arrival of Germany forward Timo Werner from RB Leipzig for £47m was regarded as a huge coup after he had long been touted as a target for Liverpool and fellow countryman Jurgen Klopp.

Werner was followed by another much-prized asset in Kai Havertz from Bayer Leverkusen for £71m, along with England defender Ben Chilwell from Leicester City and goalkeeper Edouard Mendy from Rennes for around £22m. Veteran Brazil captain Thiago Silva arrived on a free transfer from Paris St-Germain.

Hakim Ziyech was an early capture from Ajax for a deal worth up to £37m and while he has been one of Chelsea's better performers, he has struggled with injury.

The big question marks have been around Werner and Havertz, who have both toiled desperately and now look stripped of confidence.

Werner started well but has been left out of Chelsea's team recently while Havertz, who was out ill after testing positive for Covid-19 earlier this season, has struggled with the pace of the Premier League and has been anonymous far too often.

As Chelsea started to fade, Lampard chopped and changed in search of an answer but it looks very much like the shocking performance at the King Power Stadium was the final straw for Abramovich.

It was very grim to witness in person, surrounded by silence in an empty stadium which was also the scene of Jose Mourinho's last game as Chelsea manager in his second spell when he was sacked by Abramovich after a 2-1 defeat in December 2015.

Applying his usual rules, Abramovich will have watched from afar as Chelsea succumbed timidly to a Leicester City team with more quality, more drive, more organisation and better coaching. It was a painful night for all associated with the west London club and will have been noted upstairs at Stamford Bridge.

The manner in which Chelsea were embarrassed at home by Manchester City on 2 January, the 3-1 scoreline hugely flattering, will have started the alarm bells clanging.

Lampard's body language in his final days was dignified but also occasionally spiky, taking public issue with one journalist at a press conference. Although in these instances it must also be said every manager has a right of strong reply when he feels - rightly or wrongly - he has been done an injustice.

He ended with an FA Cup fourth-round win against Luton Town but his fate had already been sealed.

Once Abramovich signed off on that vast summer investment the pressure on Lampard ramped up, no matter how much he tried to manage expectations and distance his side from title talk.

It made no difference that Lampard tried to shape those perceptions in front of the media. Only one man's expectations matter at Chelsea and Abramovich made it clear what those expectations are by rolling the credits on his time at Stamford Bridge.

Lampard did not do a bad job at Chelsea and plenty of his admirers will believe in time he could have got it right, should have had more time to bed in so many new signings, been given more leeway because of last season's fourth place, and the way he has nurtured fine young talent such as Mount and Abraham.

It is unlikely he will see this as a last staging post in management at such an early part of this phase of his career. He is still one of the most respected personalities in the game with a glowing reputation as a player and he may find, viewed through the prism of Chelsea's history and rapid turnover of managers, that his standing is not greatly damaged by this chastening episode.

There will surely be more takers for Frank Lampard the manager in the future.

For now, though, he is just another Chelsea managerial sacking statistic - club legend or not.