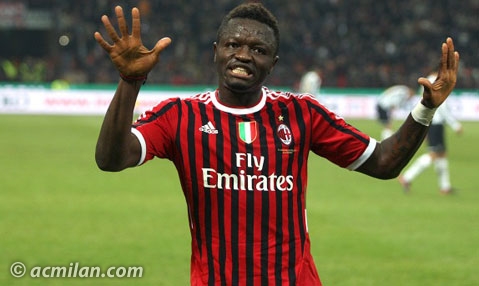 There is no stopping Sulley Muntari, professional and productive.

One of the four Mâ€™s of Milan January transfer window is working hard scoring and making goals.

His arrival at the club was made official on 31 January, around 70 days ago.

Since then, the midfielder has played in the African cup of nations, scored on his debut against Cesenal, scored the disallowed goal against Juventus, gave the pass to Ibra for the winning goal against Roma and gave his team three points on Tuesday night with a screamer against Chievo.

Just like Mark Van Bommel last year, Muntari has become a new and important part of the midfield engine from February 2012.

Since 19 February away to Cesena, Muntari has been a constant presence in the team: 8 games in the league with almost 700 minutes played and substituted only twice (after 62 minutes against Lecce and after 91â€™ away to Parma to make way for Rino Gattuso) and he is scored three.

It has been two years since Muntari played with continuity. He is doing it at Milan and the results are there for all to see.