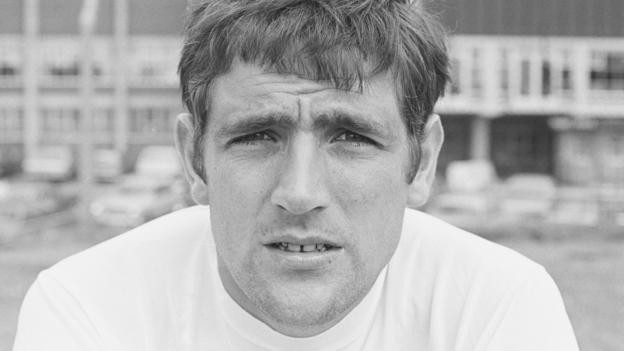 Norman Hunter built a reputation as a fearsome tackler

Ex-England defender Norman Hunter is being treated in hospital after testing positive for coronavirus, his former club Leeds United have confirmed.

He was also part of Sir Alf Ramsey's England squad for the 1966 World Cup and went on to win 28 caps in total.

"Keep battling Norman, we are all with you," a Leeds statement said.

"We would like to take this opportunity to remind the public and the media to respect the wishes of Norman and his family and to give them the space they need during this difficult time."

Hunter's reputation as a fearsome tackler was borne out by his nickname 'Bites yer legs'.

He formed a strong partnership with Jack Charlton at the back for Leeds, also adding European silverware in the Inter-Cities Fairs Cup, an FA Cup and a League Cup to his and the club's haul.

Only three Leeds players - Charlton, Billy Bremner and Paul Reaney - have made more appearances for the club.

Hunter also played for Bristol City and Barnsley, and then managed the Tykes along with Rotherham United.